A Review of the Jacie Series by A. Del

This costume should be a sin by itself…

A Review of Taken by the Fiery Demon by Lucey Fur 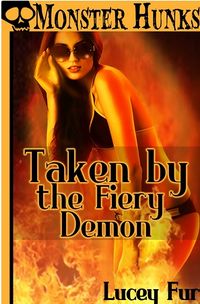 Taken by the Fiery Demon by Lucey Fur

A story this time on the Tale of a Cambion, an incubus, meeting a human that’s more than she seems to be… and a Succubus that just made me smile when she appeared out of thin air.

Stories that have a heart, feeling, some connection between the characters are some of the best stories by far. Balancing that connection with some heat to bring the story to a boil is wonderful to see… it’s just a shame when the story comes to a close when there is so much promise to it…

Evelyn was an amateur photographer of monsters, walking off some steam after a bad encounter with a grabby guy she met on the internet. She encounters Cam, a demon with a hot human form and even hotter, fiery abilities. When this incubus hybrid offers her the chance to join him in his stage show at the Monster Hunks club, how could she possibly refuse?

Evelyn walks into the arms of an incubus after a really bad date and he offers her something that appeals to her nature. She’s attracted to him, agrees to go with him, and then finds herself being part of his stage show at a very special club. When the show is over, then the real fun begins… and then the truth Evelyn never knew comes out.

Evelyn has a secret, one that attracts her to Cam and vice versa but for most of the story that secret is simply not referred to, or mentioned. It is only after the climax of the story when the consequences of that secret, what it means for Evelyn and Cam, comes out. It doesn’t quite seem out of place considering the hints that were given from the beginning of the story, but the way it is revealed was quite surprising and amusing at the same time…

Cam, short for Cambion, is an Incubus with some interesting fire and heat abilities. He isn’t quite all human physically, but not in a really over the top sort of way. Evelyn is attracted to him, enchanted really considering that he uses some of his powers to make her blood boil… among other things. There is a delicious interplay between the two of them that I enjoyed and it set up a hot little stage show scene which followed into a hotter piece of erotica that just fit the work and the characters really well.

Afterwards, when the moment has passed, a Succubus named Isadora appears, one that I have to admit made me laugh with her character, tone, and most of all, the wonderfully open nature that she showed in the short time she appeared in the work. She was wonderfully unique and added a lot to Cam’s background and more importantly, the kind of person he, and for that matter Cam’s family are.

There is love between these characters for a lot of reasons, and the emotional attachment I think worked really well for them all. As a whole, I really did like this work very much but there were a few small flaws. One being that the work needs an editing pass to remove six instances where a word is missing or a tense is misused. The other is that the work is rather short and as such it has the problem that all short works have.

Just at the point were some important things are learned, when the future that these characters will have is drawn and told, the work comes to a close with a promise made. We never see what happens next, leaving that to the imagination. I would have liked the story to continue, to tell more about Evelyn’s secret, about Cam’s past and as well Isadora’s reactions to all that is going to happen. So many hints and I wish they had been played with some.

Just a lovely cute and sexy piece of erotica that has a heart and quite a lot of heat. It’s a shame that this seems to be a one-off story as the characters are all very interesting I would like to see where the story goes from here.