A Review of Futa Secrets: I Live with a Succubus! by Ros Allaway

A Review of Tales from the House by R.K.B. Kirin 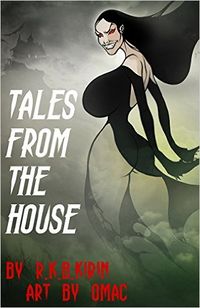 Tales from the House by R.K.B. Kirin

The personality of characters is important. There needs to be, in a single moment, a defining presence to them. Once that is set, then the story that surrounds them comes into focus, the world turning on their words, actions, needs and desires. Being able to have that moment occur once is a challenge. To be able to make that moment appear throughout the story is a talent.

A character needs to have purpose, a reason for their existence and in having that, it creates for the story the theme that runs throughout. Having that leads into storytelling that can be the most amazing of things to read.

An ancient book compels Dirk to seek out a sinister mansion where a beautiful, inhuman seductress awaits his arrival. Drawn into a night of unearthly pleasure, Dirk will learn the truth behind the dark forces that have brought him. Forces that intend to cause an upheaval which will send ripples through both the worlds of light and shadow.

Dirk finds himself called to a mansion where he encounters Selina. He is captivated by her, ensnared, and then she reveals her world, and what she needs from him. Submitting to her seems a dream… and in doing so, could change reality.

Selina isn’t quite a succubus, really she’s many different kinds of seductress, but as a whole there’s a certain tendency, at least in my thoughts, to think of her as being one. Dirk asks a question in the latter part of the work which turns on an important point, but I will return to that. She is a seductress, she expresses that in words, her actions, her voice. She is, in so many ways, passion, seduction and erotica brought to like and I enjoyed that quite a lot. The cover of the work, at least in my mind’s eye, doesn’t quite fit Selina well. She’s less “evil” than she is “practical” in her outlook.

Being so, knowing what she wants, that makes for some amazing dialog. As well it allows the story to push towards one of the more unique D/s scenes I have read in some time and I enjoyed how that played out. Selina is sure in her power, what she needs from Dirk, and the story of his submitting to her will has some lovely heat that I enjoyed. The way in which Selina weaves her story, how she draws Dirk into her world and then where that story goes is told in a way that’s very erotic, has a smoking hot tone and puts the story out in a way that the erotica isn’t simply “there” it is bound to it, pushing the story onwards, and being so makes the work so much better.

Dirk himself, as things unfold, is drawn into Selina’s web and there is a delicious undercurrent of mind control that reads exceptionally well. Dirk knows something is happening, but Selina sees to it that he focuses more on her than anything else. That beings a moment where Selina’s dominance comes to the fore.

In that moment, Dirk asks a question of Selina, and the answer to that question cemented my belief that she wasn’t a stereotypical succubus. She is something quite different and more. She has a purpose, it drives her, and in being so, she’s found there is more to her and her world, than what has been. In that moment, I felt there was a payoff in the story, that everything that had happened made sense and that thrilled me.

The work ends on a note that offers a way for the story of Selina and Dirk to continue, but it does so in a way that there is a satisfying closure to the work. There’s no disappointment in the ending, really it offers the most interesting conclusion and in doing so the characters continue to be true to themselves to the very end.

I wish there had been more told about Selina, her past, how things came to this point in time. I found myself wondering about those that had come before, what happened with them. I would have liked a little more revealed about the time between Selina and Dirk’s climax and the ending of the work. It feels like there’s a scene missing for some reason. Not a critical one by any means, just a question I have that I feel like wasn’t quite being answered in the end.

Well written, the characters are wonderfully told, the story is strong, has power, and tells of a universe that has so many stories to be revealed. Well enjoyed and recommended.

An amazingly good read, Selina is a wonderfully complex character and in being so, she avoids being stereotypical which made me enjoy the work even more. I’d like to see more, what happens next. I feel like the story of Selina and Dirk and the others isn’t finished by any means. I hope to see that sometime. To know more about Selina, the secrets not told would be a story within itself.