A Review of Tales from the House by R.K.B. Kirin

A Review of Futa Secrets: I Live with a Succubus! by Ros Allaway 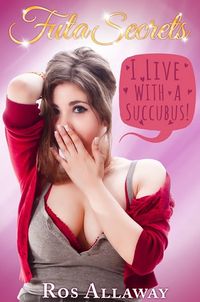 Futa Secrets: I Live with a Succubus! by Ros Allaway

There seems to be a bit of a trope that has become rather prominent in many supernaturally themed works. In these stories, the characters are usually roommates, usually have been living together for some time and, naturally, they each are hiding what they are from the other.

It can lead, on occasion, into a story that doesn’t seem to have a real focus in the parts leading towards the inevitable erotica. It’s a shame when the story starts out really well, seems to have the goal of being more than a hot flash, but then goes into the erotica and leaves the story in its wake.

Carly has been having interesting dreams about her roommate, Lia, for a few weeks. They’re hot, sure, but some of the details are…weird. Carly’s not too concerned though; subconscious sapphics are the least unusual secret in her life. Or Lia’s, as it turns out. Both girls are hiding pretty big things…huge in some cases. It’s only a matter of time before it all comes to light, the question is what will happen when it does.

Carly has been living with Lia for sometime now, the pair living out their own lives in the big city. The thing is that Carly… she has a secret. As for Lia? She has one as well. Circumstances conspire to reveal everything and in the aftermath things have to change.

Since the title of the work clearly reveals there is a futa in this work, I’ll be clear and say that person is Carly, who it the focus of the story while Lia, she is the Succubus of the work. It’s actually an interesting thing to compare the two of them and see how they relate to each other a the story unfolds.

The work tells of Carly making it through her day, all of the moments that she goes through from her job through being at a coffee shop to attend a reading group. However, that gets cancelled and then Carly comes home early to find Lia, wings and all, having her way with someone on the floor of their apartment… and then the questions really start.

Before that happens, where Lia discovers that Carly has something that Lia dearly wants as a Succubus, the story seems to be a bit lost in getting to that point. There’s a lot to tell about Carly’s day, while takes up about half of the work and that, while telling about Carly, didn’t really seem to have any real point to it. It felt a lot like filler material to expand the erotica into a longer work. While it was interesting to know Carly better, the story just seemed to drag on quite a lot until, finally, the reveal of Lia being a Succubus appears.

The erotica itself is a bit rushed I felt, though there seemed to be a light mind control touch to things as a whole. Carly does fall under Lia’s spell and in the end they both have what they desire. But again, once the climax comes, the story rapidly ends in a few paragraphs which leave a lot of questions about what happened exactly and what the future holds.

If this was the beginning of a story, I would say that it works well as a means to draw you into the story. But as this is, being a short hot flash with some context in the beginning, I didn’t feel it managed to be a complete story. More than anything the start of the work needs focus, for one thing, and the ending is a bit vague for my personal tastes.

I think there needs to be a clearer path from the start of the story to the reveal. Perhaps seeing things from Lia’s side would have made his work more interesting and complete overall. Certainly having more relationship to see would have appealed to me.