A Review of His Toy by Misha Ray 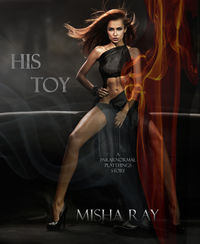 His Toy by Misha Ray

On occasion there are moments when Succubi and Incubi characters lose control of themselves. That isn’t always because of love, or need, or desire. Sometimes it’s simply a matter of being taken to the edge by their nature restrained.

When that happens, it can make for some really good heat, some moments that are wonderfully passionate in a lot of ways. Sometimes that doesn’t quite happen and what is left is just animalistic in nature. It isn’t always the most hot of reads when that happens…

Linna has finally accepted her Succubus side, which means not only accepting but catering to her unnaturally high libido. After countless invitations she finally agrees to join her best friend at the local paranormal club, The Toy Box. Of course, she’s looking for someone to play with, but had no idea she’d become a toy…a toy to be shared.

Linna is a half-Succubus with a problem. Cora, her best friend, as been pushing her to visit a club for a very long time. Unable to control herself as it is “her time”, Linna goes to the club, gets lost in her needs and finds out that she’ll do anything for the right Incubi… and they’ll do anything for her too.

From the opening of the work, which tells just enough about Linna, her situation, some of her history, it’s clear that Linna is a Succubus, but one that is somewhat more under control than the typical ones it seems. That’s more clearly put into focus when her best friend Cora appears, who is a full Succubus, unlike Linna, who is a half, and is, in short, simply focused on sex to the exclusion to anything else.

This, in time, takes Linna from being an interesting character and pushes her slowly towards giving into her Succubus nature and falling into the clutches of an Incubus. There’s a undercurrent of the beginnings of a D/s relationship in that, brought into sharp focus by Linna being referred to, over and over again, as Toy.

As Linna notes in the work, she should be mad over this and walk away, but from the moment she meets Jude, Linna’s brain simply turns off and all that matters to her is having sex with every Incubus, or other supernatural being in the bar, she can. The Linna at the beginning of the story just does not exist any longer and just is a being made for sex, having sex, and only caring about sex.

Linna is put into several situations, and the heat does build in the work well as that happens. However, the disconnect between who Linna is and what she is at that moment is somewhat jarring and I kept thinking back to how she was in the beginning as she was “taken” in the story. Contrasting that, the Incubi in the work are creatures of sex, dominant, and do not really seem to care very much about Linna herself except for how good the sex is with her. In a way, Cora, as well doesn’t seem to care all that much about Linna when things start to heat up and vanishes for a good part of the work before reappearing as things come to a close.

There is a twist in the work at the end, and I think it works quite well and plays to my own views of Succubi somewhat. Things do come to a rather abrupt halt and I would have liked to see things continue further on, at least showing a bit of what happens afterwards.

The Succubi and Incubi in this work do not have horns or tails, but in one passage it’s noted that Jude has fangs which to my way of thinking means that they are related to vampires in some way in this universe. They aren’t vampires, thankfully, and as such I like the concept to a point. What I don’t care for very much is the total loss of control that is shown. I do understand that part of that is “the moment” that comes for them all regularly and in that they lose control of themselves. but how the D/s relationship is told in this work is a bit too violent and harsh for my own tastes.

The work is written well, and overall is a hot flash with a small amount of story at the beginning to set things up before the erotica takes over. I would have been happier with the work if there had been more story to it, either in the beginning, or at the end. Better still would have been Cora more involved in the story than she was, really mainly acting to draw Linna into the club, setting her up, and then fading into the background, one assumes, to watch the fun and games. Really that’s true of all of the characters in that they are interesting, but before their stories can really be told, the erotica comes in and story gets pushed aside for the heat to play out.

As much as Linna interests me, the work doesn’t tell a lot about her, goes almost immediately into the heat of the moment, and in doing so seems to leave a lot behind. Not quite enough story for my taste and because of that, the heat when it comes really doesn’t as well as it could have.