A Review of Siren in Stilettos by Alexis Reed 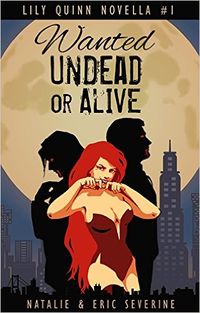 Wanted Undead or Alive by Natalie Severine and Eric Severine

The first review today of a new series called Lily Quinn written by Natalie and Eric Severine. The series is projected by the authors to be thirteen works in total, one each being released each month through next year.

Sex is part of being a Succubus, it is what gives power, control, and, most of all, a certain attitude. Being a half-Succubus only means that you have to be that much better to make your mark in the world. Sometimes that means taking care of problems and getting paid for doing so… and if there happens to be some sex along the way, that’s not such a bad thing is it?

My name is Lily Quinn. I’m a bounty hunter. I work for the College of wizards to hunt down monsters that go bump in the night. If they’re hot, sometimes I bump right back.

There’s a vampire in my city and my employers want him dead. His creator, too, if I can find the guy. I don’t have much to go on, but I think I can oblige. Vampires are deadly and beautiful – just the way I like them. I’m going to need a few things first, though, starting with a man and ending with a stake.

I just hope it will be enough.

Lily is a girl with a problem, actually quite a laundry list of them. She’s half-Succubus, which means she loves to get intimate with one special human… and a lot of supernaturals that get in her way. She’s a bounty hunter, which means she puts her life on the line to take care of those supernaturals that she’s picked up a bounty on. Then comes the problem of a bunch of wizards that aren’t quite sure of what to make of her exactly. At least she doesn’t have to worry about her figure. Her own and the money she’s making as one of the best bounty hunters there are.

There’s little time to get to know Lily, or the people that she knows well, some of them very intimately in this work, the story jumps into gear from the beginning and doesn’t pause anywhere along the way. It’s a rather interesting mix of erotica, those scenes being very hot, some action/adventure, which keeps things moving, and a dash of mystery. While the majority of the story centres around Lily having fun with the human she trusts, and then the vampires that she doesn’t. there’s a good start made to fleshing out the series overall.

Lily has a strong voice, she is the narrator and soul of the work, and there are some amazingly funny moments that come in her thoughts. While little is said about how Lily got where she is, her current situation is fleshed out well, the important characters to her have their moments, and she is a solid female lead to the series from her first appearance.

The work falls heavily on the erotica within, the story pausing quite often for Lily to have her moment to recharge and then continue on her adventure. While that makes sense with who she is, and how being a Succubus works for her, there’s perhaps a little too much emphasis on the erotica for the first work in a new series.

As an aside, Lily has not, or at least, has not shown, that she has horns or a tail, but she has the stunningly beautiful figure of a Succubus, red hair and all. She also has quite the fashion sense and interesting taste in automobiles. Which leads me to wondering how Lily connected with Max, and I want to see how that unfolded. That all said, it brings me to the thing I felt was missing in this work.

Lily is an amazingly interesting character, but she’s not really brought out as much as she could have been. There are quite a number of hints, glimpses, some suggestions, but who Lily really is gets played quite close to the chest. She is a half-Succubus, that’s quite clear, but she’s also, in a lot of ways, kind of a “Buffy” character as well. In this work the needs of her Succubus, what Lily gains from her feeding on sex with others, tells most of the tale. Thankfully, she uses her Succubus powers quite a lot, but also she simply uses her sexuality to “bend” men to her will and make thing happen. But when that doesn’t work out, when she needs to do more than just look sexy, that’s when her intelligence comes out and I liked that. I wanted to see more of it too.

The work has an interesting plot, which developed well over the course of the story. It also set up how the rest of the series will put Lily on whatever bounty is next. When the climax of the story arrives, some of the complications of dealing with supernatural beings in a world of humans are well told and it makes a lot of sense. Past that, when the work comes to a close, it isn’t abrupt or feels odd. It makes sense, it tells a little bit more about Lily, and in doing so it offers a window, if a small one, to who she is.

Lily has built up some walls around her, I think it will be interesting to see what happens to them as the series goes on. She has some relationships needing to be reflected on. She is in a world where things aren’t “normal” and how that works among a world of humans I look forward to seeing. The erotica is wonderful, enjoyable, and fun. Next comes the rest of the story.

Well written, really nothing took me out of the work and I didn’t put it down from start to finish. Lily is an exceptionally attractive character in personality and history, her mystery being one that keeps me wondering about her. A good start to a new series with a strong hook. Lily herself just needs to be herself more than she has been so far.

Going from one sexual encounter to another does work, but focusing on that and leaving the story languishing seems a shame. I expect something more than this, just from how Lily speaks, what she does and how she thinks. If the next work in the series can tell more about Lily, her past, who she is, then I’ll be quite pleased.

I won’t have long to wait. The next work in the series All’s Fae in Love and War will be released at the end of November. I do look forward to reading Lily’s stories to come and I think it will be quite the series as a whole…