A bit of a different Morrigan Aensland artwork YouTube

A Review of Siren in Stilettos by Alexis Reed 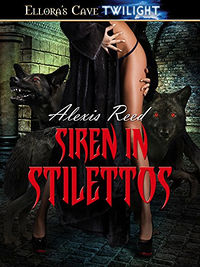 Siren in Stilettos by Alexis Reed

The second of two works set in the same universe by Alexis Reed today on the Tale, the previous work Closer to Fire was reviewed on the Tale last Friday and you can find that review here.

The previous work had, for a fleeting moment, the appearance of a Succubus named Savara and I really wanted to know more about her, how she came to be the mate of a Dragon, and why, or how, that story unfolded. This work is a prequel to the first story in that it tells of what and why things went as they did.

But it tells something more than that. It tells of the soul of Savara and what she believes in and will do for the ones she loves most of all.

Savara is idani, a succubus, feeding on the sexual energy of others to survive—and survive she must in a brutal breeding program intended to splice her DNA with that of other powerful races.
Kai is a dragon shifter, one of those on whom she’s supposed to feed. She wasn’t supposed to fall in love with him. And if they escape this nightmare, she might lose him forever, to a true mate among his own kind. But they have to try, even as they and their allies are pursued by Levian, a powerful incubus who wants Savara for himself.

Savara is a Succubus with a problem. Well, problems actually. The first one is that she’s trapped. The second is that she’s found there’s more to life than just living. The third is the one that’s shown her is as trapped as she is. The fourth? That’s the most awful one of all. It’s the possibility, no matter how much she cannot believe it, that Kai is her mate…. And he’s a dragon.

There were so many questions left in the wake of the first work in this series and many of those were how things came to be the way they were. There was talk of war, of the mystery behind that war, and more. It wasn’t core to the story, though it did add a level of conflict to the story that made it more tense for the characters. The mystery only deepened when Savara and Kai appeared, quite literally out of thin air. For me, I really wanted to know more about Savara, a Succubus that seemed… different.

Of the two works in this series, this, the second one, I liked much more than the first for many reasons, but the one that matters the most is Savara herself. She is, in many ways, what a Succubus should be. She is not because she is able to shift her form, or teleport, or even that she has an amazing ability sexually. The thing that sets her apart is that she can love and does love with every fibre of her being. Be that Kai, or her hellhounds, or her own kind, she isn’t afraid to show that she has found love, knows what it means and finding that makes her more powerful than really anyone else in this story in many ways.

Savara comments to someone in the story, when she finds out that Kai should be the leader of his kind, that she’s no Queen. In truth, more than anything, she is. The ones that do not believe they are worthy are the ones that truly are. Savara is strong, passionate, smart, but also she has within her compassion, love, and understanding. She isn’t perfect, she has her fears, her little bit of vanity too. She is… for lack of a better word… complete. Whole. From the moment she appears in the story her voice is clear and she is very much the presence in the story. Her emotions aren’t hidden away and the love she holds for Kai is there in every moment.

There is a moment where she grieves for the loss of two that are close and dear to her. In that moment she became for me, a fully realized being in the story. There are some in this work that are stereotypical to a point, which I’ll get back to, but it is when the uniqueness of Savara is told, the person that Kai is comes out in her embrace, that the story just pulls at my heart so much and so dearly so.

Besides Savara. there is another Succubus that appears for but a moment and she is a pale reflection of Savara in many ways. Part of that I think comes from the situation they are in at the beginning of the story, what has happened to them for so many years, and how desperate their situation is. That scene did show however the steel within Savara and it helped to set the story going forwards.

There is also the appearance of an Incubus in this work, Levian, who is abusive, more than slightly insane, and worst of all, is completely stereotypical in nature. Considering his role in the story, I can understand why that is, and I think in many ways he was really intended to drive the climax of the story and allow this work to retroactively connect with the first work. However, there is also the question of the rest of his kind which, thankfully, the story reveals to be more than what Levian would make one think they are. I really don’t like stereotypically evil characters and, Levian was that for me. As a whole he was the one disappointing part of the story and I’m not sure he really had to be in the story as a whole. His appearance adds tension, some danger, and a teal threat to Savara and Kai, there is no doubt, but… I just thought he was less interesting than the story of the war, the threat that Kai and Savara escape from and the rest of that world.

I really liked Savara so very much. I think that the hint of her that appeared in the first work didn’t really reflect the Savara that appears in this one and that may well be a matter of her being a minor character in the first work and she wasn’t really fleshed out well there. But she is here, lovingly so, and that meant the world to me that she was.

The ending of the work is really just perfect and amazing in a lot of ways, not the least of which is that an aching loss to Savara is healed and with that healing for herself and Kai, the future is open to them and more. The work closes at a point were the first work comes into the story, and as such some of the questions about Savara and Kai are told in the first work to an extent.

However, there are still so many questions left unanswered. I really want to see a third work in this series that gets to the core questions that both books dance around but never really explore. I’d like to see what happens afterwards, if Savara becomes a Queen to her King. I’d like to know that the one responsible for the war is dealt with. I’d like to see the questions about the Succubi and Incubi in the world explored and told more of. There is so much to be told that hasn’t been and needs to be. I hope it will be sometime.

Both works in this series are amazingly well told and the characters are bright, passionate and alive with every word. A lovely read that tells of one Succubus who finds out the impossible isn’t impossible. If someone believes in you. That’s a good lesson to hold in one’s heart I think.