Succubi Image of the Week 407

A Review of Closer to Fire by Alexis Reed 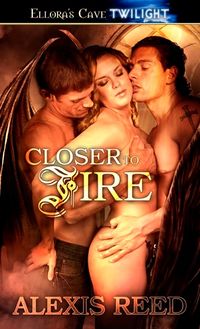 Closer to Fire by Alexis Reed

The first of two works set in the same universe by Alexis Reed today on the Tale, the following work Siren in Stilettos will be reviewed on Sunday. A pair of stories that have two very opposing Succubus characters as the leads in the stories.

War is a terrible thing, and with it comes events that change the course of the world, but also change the lives and loves of many as well. It is also difficult for someone to not know why things happen to them, only that they are different, but not to know why. When the truth comes out, then the question to be asked is… Where do you go from here, and whom will will you trust to take you there? Sometimes there’s more than one person to fill that role…

Bane and Darek have simple instructions from their sovereign. Bring in Lily Sinclair. She’s an idana—a succubus—and a threat to their dying species. The two dracambri, powerful dragon-shifters, have Lily’s profile. They know she’s as hot as the inferno in her blood. They know the temptation they will face. Or so they think. Once Bane and Darek get their hands on Lily, she shatters their expectations. Gentle, kind and unaware of her bloodline, Lily is a rarity, like nothing they’ve seen—an angel with the touch of a siren. And unlike the human men Lily’s been evading all her life, Bane and Darek can keep up with her. They can bring her pleasure like she’s never known.

Lily wants to hide herself away and tries to as much as she can. It’s better not to meet others, to remain in the shadows and hold the terrible truth she knows about herself. Enter Bane and Darek who know what Liliy is. But there are complications for all of them and secrets to be revealed. Not all of them are the ones physical, many of them are the secrets of the heart and soul and mind.

I loved Lily dearly in this story, her personality, how she looks at the world and what she seems to know and understand about herself is an interesting thing to watch unfold. There is a moment, a very important one, when she reveals a truth about herself that neither Bane or Darek can believe is true. But it is, and for me, what unfolds from that point forwards is Lily spreading her wings and learning about herself, but also about Bane and Derek. The connection that formed around all of them, how that connects with Lily’s innocence, but also her own strength is really well told and I loved each moment as it unfolded.

Lily wasn’t the perfect Succubus, but then she wasn’t meant to be. Learning about her, about her mother as little is told, put into words the story of a old soul that needs nothing more than someone to love and to be loved in return. When that comes in the story, it’s just a delicious moment and I loved that very much.

The work as a whole tells a complete and passionate tale of one woman’s journey from being alone to finding not just her soulmates, but herself. Making that all work, connecting events not seen into a story that revolves around the three main characters was almost perfect. There are some open ended questions I would have liked to see fleshed out more, Lily’s mother Mara Sinclair for one and the other Succubus that appears for a short time, but is talked about very much through the story, Savara.

There’s a huge number of questions about her that aren’t expanded on and what transpired in the time before this work, that’s something that needed to be told. It was in the next work in the series, but that came out long after this work. Savara isn’t like Lily, nor should she be. She’s much more sexual, more powerful and more sure of herself. But she also loves and is loved in return. That relationship was one I wanted to see more of and more of Savara herself.

The Succubi in the story look very much human, there are not horns or tails or wings. But they have a glamour. a sexuality in one case, in the other pure innocence, but in both there is no question of when their love is given, it is for always and without reservation. For me, seeing that being such a part of them just tugged at me and I loved the work for giving them that and not making any of them “evil” as they could have been.

A story with heart, soul, passion and mystery. Characters that are not cardboard or stereotypical. Really everything I look for in a work with Succubi. Just really would have liked to know more about Lily’s past and the world of the Succubi than is told.

A wonderfully told story of discovery. Not just for Lily, but for many in this work. A work that doesn’t tell all of its secrets, but leaves you looking for the answers not told. The next work in the series, Siren in Stilettos, does not tell the future, but rather the past and in that comes the story of Savara and what she did to get where she is.

That’s as powerful a story as this one, but the taste, who Savara is, that’s quite a different thing from Lily and her innocence…