A Review of Craving by Lilith Lo

A bigger pitchfork doesn’t help this costume at all 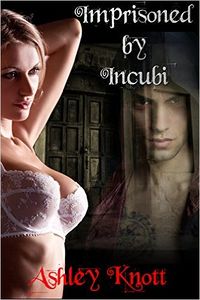 Imprisoned by Incubi by Ashley Knott

A review of the first work in a series called Escape from Hell House in which there are quite a number of Incubi appearing. At the time of this review, a second work in the series had not appeared and I have some mixed feelings about that.

There are those that call out in need. They desire, need, whisper and moan towards sating what cannot be within them. If one cannot turn away, if there is no where else to go, are you willing to give up all you are for the sake of what they desire… and are you the one that desires them more? Or is it all a game and you are but a pawn within?

Lori is an American student backpacking through the Scottish Highlands. When a car accident, bad weather and the approaching nightfall leave her stranded, she takes refuge in an abandoned manor house.

Little does Lori know the house is infested by incubi: demonic spirits who feed off sexual energy! These incubi are starving, and Lori’s their prisoner. She needs to think of a way to escape, but until then, she has to feed them, and that means she will be taken by multiple demons in the most pleasurable ways she’s ever experienced…

Lori decides to go off on her on, having no real destination in mind. A car accident, a long walk through the Scottish weather, and she finds herself at a long abandoned manor. A night of sexual dreams turn real as the world around her is reshaped by those that need her. A struggle for control and what comes after means Lori has a choice to make. Or is that as much an illusion as what she sees, or is it as well as what she feels and cannot escape?

While the majority of the work is solidly focused upon the erotic, what Lori is feeling as the Incubi surround, touch, and then use her in all sorts of ways, there is a fair bit of story leading to that. While there is but a passing note about who Lori is, her past, and why she decided to go off on this adventure, the story behind why the Incubi are where they are, what they intended to do, even their names are a mystery. It is odder still when there isn’t one sort of Incubus, but many different kinds, with their own looks, needs, and actions.

The work is very much male, or rather males, plural, dominated, and at times this is very over the top, pressing towards the hyperbolic in nature. The moments of seduction pass very quickly and when Lori shows some resistance to the Incubi, it is rather sad how they seem to turn into something akin to bratty, demanding children that take their toys and leave Lori to suffer for her choices. It was disappointing because I don’t think it needed to turn in that direction, to be so clear about what the Incubi were really like, or seemed to be, and what Lori would have to consider going forward.

The choice of resisting and perishing in the moment, or giving in allowing herself to be used as they want and then losing herself to them I think needed to be more telling in the work. The choice is made far too quickly, the outcome even quicker still. The sense I had was that the story needed to be pushed aside quickly so that the erotica could return and the story could drive towards its conclusion.

The work ends on a cliffhanger, and in a lot of ways it is unsatisfying considering what Lori goes through, what the Incubi are doing and how Lori is reacting to them. The story ends far too soon, in the middle of thought and feeling overwhelming that. Story didn’t matter in the last page or two, but I don’t think there was any way to bring the story fully back considering what Lori was going through in that moment.

The work is well written in its descriptions of Lori’s feelings and what she perceives is happening to her. There isn’t much in the way of character development, and while there is some story being told, it pales to the erotica that the work mainly focuses on. More about the Incubi, more about why things are, and it would have been a better start to a series. As this is, it resembles a slightly extended hot flash with a smattering of plot.

The mix of suggested horror and very strong erotica is unique and there were some heated moments that I did like. However once over the edge, when things turned more towards the horror and less the heat I found it a somewhat difficult read. There should be more to this story, the title well suggests that, and I’d like to see where things go. Cliffhangers are what they are, but as well, they offer some promise. I hope the author finds the story they wish to tell among the heat and horror that awaits.