Not Going By TeraS

A Review of Craving by Lilith Lo 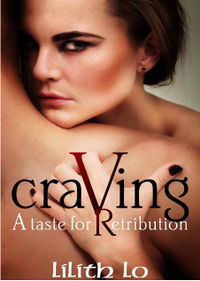 Many times the wordplay between two characters is more than just words. There is meaning hidden in the words, kept at bay, held close but still shown if one looks for it… If they dare. There sometimes is a veil that hangs over their meaning, the moment they share, what, in the end, the moment transpires to be.

Serial killers have feelings, too. Gentry has been on the hunt for such vile humans for centuries. Finally, he closes in on one of the most prolific killers he’s ever hunted. Only, fate has something more in store for him and instead of reigning in Evil, he becomes enslaved to it.

Gentry holds in his arms Beth, a woman with a secret and a past. A long one that holds things that he never realized she could be. Words are shared, temptations are offered and in the moment when he knows the truth, the real Beth appears and holds him fast… and forever.

The work reads very much like an intimate scene held between two lovers that are dancing around a series of questions which seem almost innocent at first. However, as the story progresses the darkness behind the words starts to creep in and make itself well known. While that is present, it is muted by the passions between Beth and Gentry and what they offer to each other, or resist as they can.

The dialog continues on in a kind of dream-like state, the two groping their way through the words, the touches, the passions that slowly burn between them. For the most part, Gentry seems to be in control, leading the way, his path sure. That is until the tide very subtly turns and Beth’s read nature and power come to the fore and what she seems to be emerges from the shadows.

For all intents and purposes, Beth is a Succubus, it’s quite clear from her actions, how she wraps Gentry around her finger, how he feels and knows when she takes from him. While he is a vampire, he cannot find a way to resist her, not that he ever could, and from what little hints about Beth’s past are given, and what she has done in the moments before in this story, it’s clear that what Beth seems to be isn’t what she is. After all, one of the powers of a Succubus is to be a chameleon. Beth’s quite good at that.

While the heat in the story is well done, the main problem I had was that the work tended to drag at times, seeking the next moment, the touch, or words, that needed to come next. I think a great deal of my feeling lost in the story was that the story begins in the middle of things, the two characters obviously having been entwined for a time before. Dropping into a story like this is a bit jarring and as such it’s hard to gain one’s footing in the story and process what is going on.

The work is very short, very condensed and as such when the reveal comes things move very quickly to the next moment and when the ending comes it is a bit unsatisfying in nature. There is a “after” which isn’t seen that reflects the beginning which isn’t either. Both would have, I think, given a lot more to this work as a whole and I would have liked it more than I do.

Really the work is a moment, a scene, a passing exchange that is wrapped up with innuendo undone and incomplete. I don’t mind stories that leave you guessing, but sometimes it’s better to give the point to the story instead of letting it be hidden and guessed at. More story about these two characters I think would have made this more than it is.