A Review of the Little Love series by Catherine LaCroix

Not Going By TeraS

A Review of The Devil’s Daughter by Emily Wood 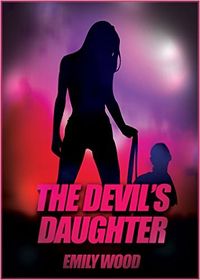 The Devil’s Daughter by Emily Wood

There are some stories where, at some point, things take a turn which is supposed to be unexpected, a surprise. Something that makes one think about what came before the twist and then try to keep up with what comes afterwards.

Sometimes that works, the twist is hidden well, it makes sense, and means something to the story overall. Other times the twist is questionable, a bit unwarranted, and perhaps even takes a lot away from the story as a whole.

It isn’t always about the twist however. Sometimes it is taking a character that seems to be different and interesting and turning them in a direction that just loses me as a reader.

The Devil promises Ryan everything he would ever want: fame, fortune, all the things a mortal will ever need for paradise on earth. But he doesn’t want your soul, he just wants Ryan to take his socially awkward daughter, Gertrude, out on a date.

Gertrude turns out to be very attractive and starts out shy and nervous, she has all the magic powers she could ever want, and considers using them ordinary.

At first Ryan also seems hesitant, but getting to know her throughout the day while doing fun and activities, getting into some trouble, he really begins to like her and realizes that the “everything he ever wanted” includes her. He also realizes the day completely flew by. At night after the day long date he goes back to the spot they first met kisses her and she asks him to come back to hell with her.

In hell Gertrude reveals her true self…

Ryan makes a deal with the devil and the cost seems to be a simple one. Take his daughter, Gertrude on a date. She’s not what he expected and things turn in a direction he didn’t expect. Their time up, Gertrude asks Ryan to come home with her, and then things take a turn that Ryan didn’t expect.

There really isn’t a lot told about Ryan in the work, he’s there, in the story, but as for who he is, why he made the choice he did and so on, that’s not delved into. His thoughts and wonder over Gertrude comes out well, but otherwise he is a bit of a cypher overall.

Gertrude is far more fleshed out in the story, but there are two sides to her and that’s where things are both interesting and a bit difficult to accept. At the beginning, Gertrude is cute, but there’s hints of her seductive nature, of her powers, of what she can do. Mixed into the things that Gertrude and Ryan do comes a short little moment that I loved, involving cupcakes, and I felt as if the work might reveal Gertrude to be a succubus, but not the typical one.

When Gertrude revealed her true self, it isn’t too much of a surprise, the other shoe was going to drop about her. She’s, if not completely a succubus, then it makes up a lot of her character. She has horns, tail and so on, but her physical form isn’t what she teased Ryan with. That’s perfectly fine, it is expected from all of the little hints and quirks she has. Where it goes wrong for me comes in the latter half of the work.

The work needs another editing pass, there are several spelling mistakes, some dialog that is odd. Some sentences, are just wrong, for example:  The sun beat was beating down on their backs. That sentence makes no sense at all. I get what the author meant to say, but it just brought my reading to a screeching halt as I tried to process that sentence.

For all of the really good story telling at the beginning, when the story shifts to Gertrude and Ryan in Hell, the tone changes and the story gets pushed aside for some rather cruel female domination that doesn’t serve much of a purpose other than a contrast. The “real” Gertrude is very different, but that would have been fine.

It would have if the change was more in line with everything that was telegraphed on the date. There were hints of it, and I wanted to see that play out as it seemed Gertrude wouldn’t be stereotypically evil. Sadly, for me, she was. There’s too much “nasty” that overcomes the “hidden seduction” that Gertrude allowed peeks of earlier.

Overall the work can be split in two halves. The first part is funny, cute, mysterious and seductive. The latter is something that can best be described as over the top and stereotypically “evil”. I don’t like the latter part, there could have been better choices made.

The idea was good, I liked Gertrude for most of the story, but when things went off the rails, when the real Gertrude appeared, that disappointed me. I expected something more from her and instead she was too stereotypical for my tastes. That wasn’t unexpected, by any means, but as well, there could have been a different turn. That doesn’t need to be anything “romantic” but it does need to reflect Gertrude’s character better considering all that came before.