Belle of the Ball By TeraS

A Review of Church of the Eternal Succubus by Arvin Stevens

A Review of Succubus Society by Eden Redd 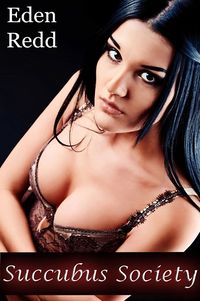 Last week I reviewed a work by Eden Redd called Rise of the Succubus, and you can find that review here on the Tale.

I was wondering what might come next and where the story would go. It took a little bit of time for the author to come back to these characters and I’m actually quite pleased they did so.

One of the things that can be compromised, if one is not careful, is one’s humanity. It can be so very difficult to keep that piece of yourself intact when so much otherwise is trying to pull you in directions that both unexpected and unknown. Sometimes when you are pushed to your limits, you need to push back. But what if you aren’t sure that you want to… or can?

Rita is having a difficult time controlling her urges. As she and her fellow succubus, Alina, drive to New York, they do what they can to ease the fire of her demon blood.

But the lust is overpowering and Rita is losing the battle. Once they reach the Society, Alina must meet with others of her kind and decide what will be the best course of action for Rita’s lustful hunger. It may take all of their power to slack her growing thirst.

Alina and Rita have left Rita’s old life behind and are travelling towards her new world. Along the way Rita loses herself to her new needs, discovers something of what she has become, and then needs to make a important choice about her future. Alina shows her the world of the Succubi and Incubi, but is Rita prepared for what that means or will she find herself on the crest of a wave she cannot control?

The most interesting thing about this story is the world building which develops over the course of things. There’s a good deal of time spent with Alina trying to help Rita control herself, her needs and her abilities. Rita is, as a whole, very much on a hair trigger the entire work, needing to feed and being, for the most part, unable to control herself. To have this unfold is good and I think adds a certain amount of conflict and uncertainty towards what Rita is feeling and what she does. In the moments when she is entwined with others, trying to feel the need that is consuming her, there’s still that little piece of her, her humanity, that tells her she should feel regret, feel concern, worry about what she is doing and why.

Beyond Rita’s battles within herself, once she and Alina get to where they are going, the work opens up the hidden universe of the Succubi and Incubi and it was really interesting to me. It isn’t a simple matter of beings like Rita acting like the legends they resemble, having no sense of control. They have a code which they live by and it makes a difference. To see how that works was the missing part of the previous story. The explanations don’t read like an information dump, they fit into the story well. There is a good deal of mind control, some dominance and submissive aspects as well. There’s a quick transformation scene at the end where tails and horns appear that works to build up the tension more before the conclusion comes and I think it was a nice touch to do.

While there is some world building, there are quite a number of moments for Rita, really a series of hot flashes that, overall, work well to show how much need she has inside and how far she has to go to find a measure of control. Some of them are a little over the top, but not terribly so and the more Succubus-like moments I did like very much.

With all of the good in this work, and how far the characters change and develop from the where they were to where things wind up, there is an issue. Similarly to the first work in the series, this work needs another editing pass for several reasons. The main one is simply that some of the dialog, when read out loud, seems stiff, not quite right. There’s an oddity to what is said that gave me pause on several occasions. Mixed in with that comes a fair number of similar sounding words being used in the wrong places and a serious problem with tenses that keeps cropping up.

The thing of it is, honestly, the promise of the first work is built on here in the second work. The work ends on a note that promises Rita and Alina’s futures are going to be very interesting and I want to see where that leads them. The world is built, the plots are set, the troubles and tribulations are quite clear. Rita has made a choice, even if it is one she didn’t have much of one in. She might be at the beginning of her path, and it likely is a long one, but that is what makes things interesting.

I really wish the author had done more editing to the work, to fix some of the word mistakes, to make the dialog a bit less stiff. Overall, in truth, it is a much better work than the first in the series because there’s a good deal of world building, explanation, and a desire in the story to tell what Rita experiences and what that does to her. I really would have liked to give this work a four, possibly a four and a half pitchfork rating… But the flaws just took me out of the story too many times and I really wish it didn’t.

Eden, the author of this work, sent me a note, actually in the midst of my writing this review, that tomorrow. October 28th, 2015, this work will be available on Amazon for free. Please do have a look, consider purchasing the first work in the series as well and, perhaps, like me you’ll be wondering what Alina and Rita are going to be facing next… and what that means.