A Review of Succubus Society by Eden Redd

A least this costume has possibilities

A Review of Church of the Eternal Succubus by Arvin Stevens 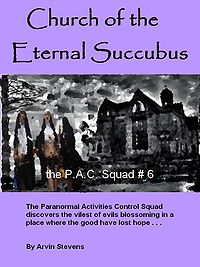 Church of the Eternal Succubus by Arvin Stevens

The P.A.C. Squad discovers the vilest of evils blossoming in a place where the good have lost hope . . .

Jack Rayon only wants to visit his incarcerated brother, but someone has other ideas – namely, the world’s deadliest assassin.

This ice-cold killer is as supernaturally skilled at killing as he is hampered in his abilities to communicate – but he is guided by a brilliant partner, deadly and immature in equal measures, a hateful young super-genius in a frail body.

But combat, violence, and death are in Jack Rayon’s blood – and Sachet Saperstein is at his side.

Yet as the battle rages to an old abandoned church that turns out to be all too occupied, all of them are about to encounter something that they hate and fear even more than they hate and fear each other — a terrifying evil as old as mankind, nursing an insatiable lust for vengeance.

This being the sixth book in the series may explain why I couldn’t find my way into this story. There are a few sub-plots running about which, really when you read the work, take the majority of the story’s time up. The actual appearance of “Succubi” really amounts to a creature of horror, some zombie like beings, and a plot that seems very much like it was taken from a teenage horror movie.

The action, such as it was, was scattered and ran all over the place. There really wasn’t much of a focus to anything, save a lot of cursing and yelling from many of the characters. I didn’t find a single character to care about, not one moment in the story stood out, and possibly worst of all the humour in the work… really wasn’t at least to me.

Now, I will say that perhaps my problem is that I do not understand this series. I do not know the characters, what drives them or anything else really. But I do know what a story should look like, at least to my sensibilities… It wasn’t in this work by any means.

I’ve said that I like to have some kind of focus, some “soul” within the story. I couldn’t find anything in this story that I could point to in order to make that possible for me. I have seen some reviews that call this work hilarious among other similar things, but… it just wasn’t.

I found the writing difficult to follow, the pace uneven, and overall it felt like an unfinished story in many ways. I think, as a whole, the Succubi, or what passed for them here, could have been wiped out of the story and it would not have made any difference whatsoever.

In the end, I just didn’t enjoy this work very much, if at all.

I’m giving this work a half pitchfork out of five.

I just could not follow the story, did not find a character to like, and really, there was a complete and total lack of Succubi in this work.