An Art in progress YouTube of Succubus Queen: Lilith

A Review of Lycan Unleashed by Tiffany Allee

A Review of Succubus Week: Tuesday by Lisbet Laire 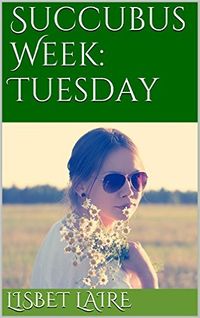 A review of the second work in the series called Succubus Week on the Tale today. You can find my review of the first work in this series here. At the time I had hoped for more about Adrienne, her life, her world. Going into this work, my expectations of that unfolding were quite strongly held because I think there’s a really good story to tell.

The thing about using a hook for a story is, at some point you need to actually have the hook mean something. It isn’t enough to have the character need to do something and then forget about it. While it can lead to a lovely hot flash, it does then beg the question as to when the hook will be used… and how the story gets there.

After an exhausting day at work, Adrienne remembers that it’s her mother’s birthday the next day and rushes to the florist. Her friend, Viola, works there and Adrienne gets more than a bouquet of flowers . . .

Adrienne has had a hell of a day, and she can’t blame it on being Monday… It’s Tuesday. Struggling towards home after fixing a mess that some foolish mermaids left behind, she realizes that tomorrow is her mom’s birthday. Having no clue what to get for her, Adrienne falls back on that old standby… flowers. But what she didn’t expect was to fall into the arms of a lover from her past and where her needs will take her.

I thought who Adrienne is came out much more in this work, mainly because there as some history told, an expression of her own needs, and there was the telling of moments in her past that clearly say that she can, and has, done some things in the past she’s ashamed of, but is doing all she can to make up for it. There’s an aspect of Adrienne that is tired, not just in a physical way, but emotionally as well. To see that bit of vulnerability in her added a lot to her character.

In this work we learn, if only passing, that Adrienne’s mother seems to be close by and that becomes the catalyst to the story as a whole. This drives Adrienne towards a florist and she finds there a friend she hasn’t seen in ages, Viola. I found that there was quite a lot of things told about Viola, and comparing what has been told about Adrienne, it surprised me.

The story, and there is a lot of it, I think worked well, told of both characters and kept things interesting as more of the universe they exist in was revealed. The erotica is a wonderfully hot lesbian flash, and I enjoyed the lust, love, and teasing that came out in that.

But the thing is, the story turned towards Viola because Adrienne needed flowers for her mother. That, to me, is a very strong hook, one that I wanted to know more about, but through the course of this story that plot was thrown to the side in the rush to put Adrienne and Voila together. It’s a tease really, a throwaway few lines, but considering who Adrienne is, what she is doing with her life, I really want to know her mother, what their relationship is like, and more.

Setting aside that disappointment, the work overall is a stronger one than the previous work because it was more focused, more to the point. It was about Adrienne, what she is feeling, how her life is being pulled this way and that. But most of all, it told about her needs and, in a way, her fears. Character development is a good thing and there was some to be seen. I hope this continues because I do like this series and I want to see where things go from here. Especially if Adrienne manages to remember the flowers she wanted to get in the first place.

After some lovely erotica, the work comes to a rather abrupt stop, much as the prior work did. I think there needs to be more than a single line to close out all that happened here, if for no other reason than to show that the moments shared between Adrienne and Viola matter more than just Adrienne feeding and sating herself.

A better story, as a whole than the first in the series, even if the pay off of seeing who Adrienne’s mother is didn’t come… even if Adrienne did. Still the ending is very abrupt and after all of the good that just didn’t quite work as it should have.

Wednesday, obviously, is next. Who is Adrienne’s mother and what happens when daughter visits mom on her birthday? It’s something I really want to see. I hope it is all that I want that moment to be too…