Succubi Image of the Week 405

Where exactly is Lost Girl going to put that lucky horseshoe and will it fit?

A Review of Rise of the Succubus by Eden Redd 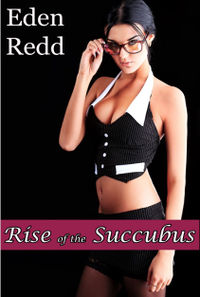 Rise of the Succubus by Eden Redd

While the erotica is important, story matters more to me. Sexy, seductive is wonderful, but without the meaning behind that it’s nothing but sex. Having that story matters. Telling that story is more so. And sometimes editing isn’t a bad thing to have as well at times…

Rita and her three best friends, James, Paul and Bobby move into an old house. They spend the summer working on it before they embark on their first year of college. As they fix up their new home, they discover a strange necklace hidden deep within the house. Soon Rita hears strange whispers. They tell her to do things that she only dreamed about. She fights the temptation but they overpower her with seductive lust. Can she fight the maddening desire? Or will she be an unwilling pawn to the demonic succubus.

Rita and her long time friends move into a house, clean things up, and then they all get quite a bit dirty when Rita gets touched by a Succubus that needs something from her… But offers something Rita wants in return. Where that takes them all is the question to be answered.

The work is a hot flash but with quite a lot of buildup, character and storytelling mixed in. The voices of each of the characters are very clear from the beginning and each has a story to tell about themselves and how they relate, and secretly need, each other. In a lot of ways there is a sweet friendship love story within the erotica and that made the work quite appealing to me. There’s love between the characters even before the Succubus appears and as such there isn’t a sense of harm or moments that feel wrong when the characters become intimate together.

Rita herself is an interesting mix of wanting and needing but also being afraid of herself in many ways. Unlocking herself, who she is, what she desires explores things she’s dreamed about but never thought she could try… or have. There is a lot of character growth as the story unfolds and the Rita at the beginning isn’t the Rita at the end of the story.

That’s due to the whisperings and promises of the Succubus of the work, Alina. For the majority of the story she’s a whisper, a thought, a idea in Rita’s mind and as such she tempts and suggests things to Rita which take her to becoming something more than she is. As the climax of the story comes, so does Alina and when she appears finally she isn’t stereotypical in her nature or form, though she has a tail and horns of course. She’s passion and seduction, but not evil and that fits in well with the story.

When that truth comes, it really isn’t a surprise as there are a lot of hints about Rita herself. How Rita is changed by that truth isn’t really dwelled on much, and as a whole it really didn’t need to be, but for myself I would have liked to know more about “Rita after” in who she is, how she’s changed, mentally and physically, and what that means. There are some questions left open which would have been nice to know, but they aren’t sadly.

The work ends on a bittersweet note for me personally in that Rita is forced to make a choice, one that feels like she really didn’t have one, and then the story comes to a close with a promise unfulfilled. It is a bit of a let down after all of the joy and good in the work and I couldn’t help but think the author might have ended the story a bit sooner to avoid the sadness of the ending.

But the ending does point quite strongly towards another work in the series and that I think will be a promising thing based on the story so far. There’s a good mystery that Alina leaves in front of Rita and discovering that would be something to see.

There are a few rough points in the story that another editing pass would help with. Mostly they are odd words in odd places or a tense problem, one or two spelling mistakes, but none of these things are glaring mistakes by any means. Still they took me out of the story and that shouldn’t have happened.

I liked the story as a whole, I liked Rita and Alina, as little as we saw of her, and it was a story that didn’t go in the direction of “all sex and no thought” which mattered more. A little more editing would be nice, but otherwise a nice hot story with promise within it for something more to come.