The Mirror By TeraS

A Review of Seduced by the Succubus by Avery Fox

A Review of Nikki Noshit 2 by Nikki Lacroix 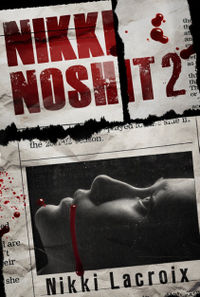 A story needs to have purpose. It cannot simply go around and around in circles looking for one, attempting to figure out what it wants to be talking about, what the characters will do, or won’t. It is never a good thing when the story seems to lose focus from the first turn of the page and never finds it by the time the story ends.

Paranormal journalist Nikki Lacroix is back with her first taste of semi-fame after her last article was a success. Nikki Noshit 2 collects three of her best articles.

As a whole this collection reads very much like a pulp fiction series of stories. They are short vignettes where the main character, Nikki, goes into the world in her role as a reporter and pokes around the supernatural beings that exist in that world. There is a lot of internal monologue by Nikki, which after a while becomes kind of stale and uninteresting. Nikki has attitude, there’s no doubt that she does and that attitude gets her places that otherwise she’d never get to which works well. I think however that listening to what seems to be at times a monotone of her thoughts takes away from the better, more involved parts of the collection.

In each work, it’s quite clear that the creatures and people that Nikki encounters are meant to be disliked, and it’s not hard to do so when most of them are very stereotypically evil in nature and action. This isn’t a collection of erotica, not by any means, and in truth if it was I think that would take away from the core story more than anything else. The stories are a mix of action/adventure for the most part with the story about the incubus being quite a lot different than the others in this collection.

A fairly strong mind control theme runs through the stories which comes in different varieties. That part of the stories works well and overall I thought the author managed those scenes and moments well. Mixed into this theme is, in one story, control for power, in another, control for horror, and in the last, control for sex. All of those instances read well and there was a good sense of how in each case that control manifested itself.

The last work in the collection has an Incubus, that is never named and really isn’t described all that well, but really that isn’t important to the story. It’s very much a struggle between two wills, each trying to get what they want and seeing where the weakness in the other is. Compared to the other works in the collection, this one is a lot more subtle in nature and I liked that more than the other works. The story doesn’t stray into anything erotic, teasing some reveals about Nikki herself but never really following through on them. It is a “discussion” and nothing more and that’s the problem. Nikki goes after the incubus to write a story and rather than getting much in the way of information or driving a point home, the story devolves. It becomes an internal struggle within Nikki that flashes into outrage before coming to a close and… just ending.

Come to think about it, all of the stories seem to end in a similar fashion. There is some action, some conflict and then, all of a sudden, it all comes to a close with a whimper compared to the rest of the story. While that might work for some, I didn’t feel like at the end of each story that I cared about Nikki all that much and that shouldn’t have been. She doesn’t need to be “Miss Wonderful” as there’s no point to that. But she could have been more than she appears to be. Being angry and forceful isn’t a personality, it’s a mood.

I will admit that I haven’t read any of the other works in the series, and there are a number of them, so as such I came into this work cold and not knowing Nikki’s background or anything else. It might have made a difference if I had, I’m not sure. Still, there has to be something to like about the main character of a series to enjoy and I just couldn’t find that.

I just found this work as a whole… lost… missing something. There really wasn’t much action to the stories, really no character development for Nikki, save for a bit of story about her past when she was with the incubus. Being that the stories really read like old style pulp fiction that could have worked well, but there’s something missing, some life in the story that needs to be there to make it better. That doesn’t mean there needs to be anything erotic added, that wouldn’t help at all. I wish I could put my finger on exactly why the collection didn’t work for me.