A Review of Hell On Heels by Dou7g and Amanda Lash

A Review of Succubus: Lusting for a Werewolf and Succubus: Taken by my Boyfriend’s Present by Sinn Lee 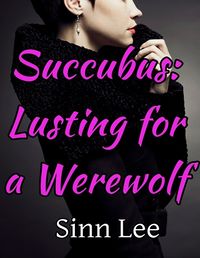 Succubus: Lusting for a Werewolf by Sinn Lee

I am reviewing two works by the author Sinn Lee this time on the Tale as I think they are an interesting comparison of this author’s writing style. The first is Succubus: Lusting for a Werewolf and the second is Succubus: Taken by my Boyfriend’s Present. They are two rather different stories about two very different Succubi.

There are some Succubi that are very dominant and others that are more submissive in nature. The question that comes to each of them can be one of if they see what they want and if they are able to have that.

In the first, being dominant isn’t the answer to everything, but it is the start to something…

A succubus is on the search for the perfect mate. Scouring the countryside for an elusive werewolf who seems to be giving the local populace some trouble. After months of searching and waiting, unable to fulfill her deepest desires, the succubus finally catches a hint of the werewolf’s location. Nothing will stand in her way to get what she wants from this primal creature.

The story is told from the perspective of the succubus herself and in doing so there is a lot revealed about her character, her wants and desires. But more importantly, it tells about her need. A need to have sex that actually becomes something that has a flavour. Human sex, according to her, isn’t satisfying, isn’t enough, and so she looks for a werewolf to feed upon.

She is, thankfully, a succubus that doesn’t kill, for the simple reason that doing so would not exactly make things simple for her. She does have a tail and horns, but otherwise seems to be human which is something else that I liked about her. But what really appealed was that she was intelligent, wasn’t the sort to make brash or silly decision and, more interestingly, she had the personality of a huntress looking for her prey.

When she finally finds the werewolf she’s seeking, the story becomes a bit complicated as it’s clear she is trying to direct the werewolf into doing things a certain way, and she tries to assert her dominance over him. But when the werewolf takes that role, she allows it, revels in his power and the ending is hot and suggests that while the werewolf might think he’s in control, the truth is much different.

Regrettably neither the Succubus or the werewolf’s name is revealed, though as a whole that isn’t core to the plot and for that matter in the case of the werewolf, he might not even have a name at that. There isn’t a lot of the power of the Succubus seen, though it is hinted at and suggested quite a lot. She does makes her horns and tail appear at one point when the werewolf is fulfilling her need however.

There is a good bit of heat in this work, though it is a hot flash, a little vignette of a story that tells of an encounter. The story lays out a good path to the encounter and when that arrives, the erotica is well written and I liked those moments as a whole. But it is a short work and with all of the build up at the beginning, once the climax is past and the story comes to a close I wanted more, which the ending hinted at. I think I could see this as being the opening chapter to a story and things going from here… It would work well really.

A good hot flash with the story to back that up, it just needs to be longer or made into a story from here. 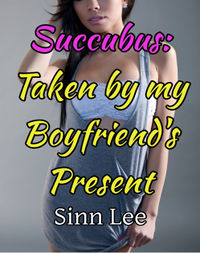 Succubus: Taken by my Boyfriend’s Present by Sinn Lee

The second work is a mix of themes. Discovery, submission and, to a point, entrapment. For some the last of these can go both ways and then some. The question then is, who is in control, why are they, and is it what they wanted or did they want something else in reality? After all, reality is what you make it, and hiding that away can have consequences…

Sandra is, at least, partly a succubus, but she’s managed to keep that hidden from the world and more importantly her boyfriend. Unfortunately Greg, meaning to protect her, binds Azel, a demoness to her. The problem is that the spell is meant for a human… and Sandra isn’t.

Sandra,while having some part of her being a succubus, isn’t really one as a whole. She’s really more human and as such, she has no horns, tail or other succubus features to her. However, over the course of the story her sexual drives are ramped up and as such her needs become very succubus-like. Sandra is, for all intents, ensnared in a trap that Azal springs on her and really there wasn’t a way for her to avoid having her succubus side awakened.

As this happens, it is clear that Sandra had a very submissive personality which Azal, the demoness of the story, plays upon. Once Sandra is transformed, it isn’t just that she undergoes a physical and sexual change, it’s that her personality, her willpower, really a lot of who she is gets buried under a submissive nature that overwhelms everything else she is, or remembers.

Azal isn’t quite a stereotypical demoness and, in a way, she’s more of a succubus than Sandra is in the story. It’s clear that Azal wants Sandra, is willing to use whatever means she needs to in order to make that happen, and if that takes a bit more than Sandra would expect from her, then that’s exactly what she does. Azal is futanari in nature, which means that Sandra’s succubus nature is drawn to both sides of her physical form. But somehow Azal’s dominant nature I think was a bigger draw to capture Sandra and the playing of that theme in the work was really well done.

The work is a hot flash, quite a good one in that it isn’t violent or has a lack of passion in it. There is a need, really in both characters, that is fulfilled in the story and that’s nice to see here. The buildup to the erotica lays out a really interesting back story for Sandra and that isn’t forgotten as the erotica takes over the story, which I thought made it better. Once past the climax and some of the aftermath was told, there still was a hint of things working out in the end for everyone in some shape or form which was nice as well.

There is one very minor mistake in the story where Azel is referred to as being “he” in one sentence, but it’s the only error that tripped me up in the work. Otherwise it is a well written hot flash, but, as is often with this author, the story really reads like the first chapter in a longer story. It would be nice to see this author write something more involved and longer as their worlds and characters are really well done.

An interesting story about dominance and submission and all of the things that go wrong and right. Just wish there was more story than this little flash gave…