Succubi Image of the Week 404

A Review of Hellfire Desire by Velma Lock 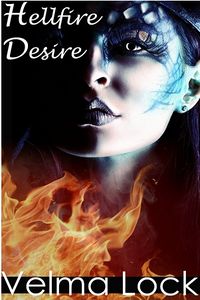 It is always good when there is story that builds towards erotica. I like to know something about the characters, what drives them, what makes them who they are. It’s interesting to see how they come into being able to, for example, summon a Succubus, how the dots take someone from one place in the world to another world where the impossible is everyday.

One thing that isn’t really touched on, and it is an interesting thought, is what can be asked in payment for the pleasures of a Succubus or, more accurately, what might be the trade if a soul isn’t involved and what that could mean.

Harley feels out of options and isn’t sure what to do with herself after loosing another job. On a whim she purchases a scroll which contains a spell that is said to make all of her desires come true. What she summons is a succubus with a pocket full of gold and some desires of her own. She’s ready to pay up if Harley can keep up. Is Harley up for this new challenge and can she handle getting filled in new ways beyond anything she’s ever experienced before?

Harley finds herself in the middle of nowhere and summoning something to make her desires real. To her surprise she summons a Succubus who gives Harley what she wants and at the same time gets what she wants as well.

At the beginning of the story, Harley is a bit difficult to like, or rather understand fully. It’s her personality, her “don’t really care” attitude that is concerning and if that continued through the entire story that would have been a problem. Thankfully there is some character development, some growth, and as the story winds its way towards summoning the Succubus, Harley tells a lot about herself.

The telling of that story, how Harley gets to the point where she’s in the middle of a forest summoning a Succubus has some ups and downs, but there is quite a lot of humour in the telling and I liked that. Her reactions feel real to who she is and when the Succubus appears, that’s when Harley knows she has a problem… the question is, of course, what the Succubus wants from Harley and how will she get that.

The Succubus, who’s name is never revealed, herself is blue, which seems to becoming a more active vision of what a Succubus is of late and I don’t mind that very much when it isn’t overstated. But she is more “stereotypically” devilish, hooves and all, which I do mind. As a whole she is very dominant, controlling, and at times there is a little bit of succubus mind control involved in the work as well. She gives pleasure to Harley, but as well she takes pleasures from Harley in a few different ways, one of which involves a slight physical transformation.

While her description is somewhat stereotypical, she really isn’t. She doesn’t want Harley’s soul, really what she wants is the pleasure, and in during so the succubus has what she wants from the “transaction” and “pays” for that, also making sure that Harley will be coming to see her again… in a lot of different ways. She has an interesting personality which is hinted at, but very soon the story turns towards being a hot flash and the story moves to the side for that.

The work past the setting up of the events that summon the Succubus are, as a whole, a fairly good hot flash piece of erotica which touches on several different themes. There is a bit of transformation, a bit of mind control, and it all works well with the author’s writing style. It is a bit more than simply a quick “get the main character off in a hurry” encounter, and as such it is more interesting as a result. There’s a hint of a D/s relationship beginning, the Succubus in control of that by far, but it is very slight and isn’t the core of the erotica.

While the author’s writing is very good and I liked the story as a whole, the work needs one more editing pass for some rather silly little errors in the story that tripped me up. They were mainly descriptions in the story where “eyes” would have worked better than “eye” considering that the character had two of them in the story. They aren’t terribly bad errors, but I noticed them and as such they pulled me out of the story when I shouldn’t have been.

The work is short, sadly, and it ends on a note which really demands a continuation. Harley is a unique character and I’d like to see her again. The Succubus is as well, but she needs a name honestly for all that happened in this story between her and Harley.

A good hot piece of erotica with an interesting main character and a Succubus that, if she didn’t have hooves, I would have liked a lot more than I did. One more editing pass would have been good to overcome a few small errors, and perhaps there should be a part two to tell about what happened the next time the Succubus appeared in Harley’s life.