Thanks Given by TeraS

A Review of Succubus Prey by Emily Bennice

A Review of Overpowered by Sylvia Parker 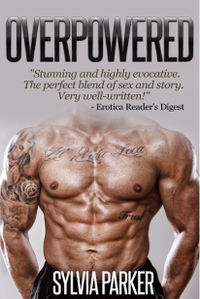 Some time ago I reviewed a work called Just This Once by the author Sylvia Parker, and you can find that review here on the Tale. At the time I noted that the appearance of the succubus in that work, named Ubana, was fleeting and as a whole didn’t seem to have any real point to it.

Today’s review is of the second work in this series in which Ubana returned once more. The question I had was, of course, was she going to be more than she was in the first book or was I going to be disappointed once more.

Anna is taking a relaxing bath when she is interrupted by a knock at the door. Without warning, her door is broken down by Captain Armstrong and four of his Elite Werewolf Guard. Covered by only a towel, she is told by Armstrong that she is wanted for questioning regarding a questionable event in her past.

But before he can extract her from her home, another unexpected guest arrives. Ubana, a powerful succubus, enters the fray and dominates the scene. Captain Armstrong is powerless to stop her as she mind-controls the four massive werewolves which accompany him. Using her magic, Ubana amuses herself by setting the werewolves loose on Anna.

Despite herself, Anna finds that she quite enjoys being… overpowered.

Again, as in the first work in this series, the summary tells just about the entire story of this work, but, the difference is that Ubana the succubus has a much more active and central role in the story. With that comes a good bit of character development and what seems to be driving her in the work.

While that is a good thing, the problem that was in the first work is quite apparent in this one as well. The story reads very much like a very over the top sexual fantasy Dungeons and Dragons adventure in many ways with just about every trope being seen at some point in the story. The majority of the story is taken up by Anna and the werewolves being controlled by Ubana and her cohort which was disappointing considering that the beginning of the story had some promise to be at least better storywise, which it was.

Still, the story comes to a point where the only thing that Ubana wants is to get Anna all hot and bothered which then leads to the sex scenes and, of course, a bit of death and destruction at the hands of a rather stereotypical succubus at that point.

The name Ubana should be familiar to those that had read other works by this author as she has appeared in several other works. Between the two versions, the one in this work is somewhat more palatable in that she isn’t exactly as evil as her other incarnation and she seems to have an actual plan to most of her actions, but there are some things missing still which are disappointing.

There really wasn’t all that much that held my attention plot wise, and honestly there could have been a lot more lead up to the main story and a better ending than there was. The writing is better, there aren’t any glaring errors in the story, grammar, spelling or otherwise, and as such that did make the work a better read.

The erotica was, for me, again rather lukewarm. It’s a lot of mindless sex under the control of Ubana and then her involvement really only serves as a means to push the story towards the conclusion a little quicker than it otherwise would have. Again it seems like the plots got pushed to the side for the erotica which doesn’t add anything to the work for me at that point.

That is a real problem as the story at the beginning, what is revealed and where it could go forwards comes to a halt when Ubana appears. It is an odd comparison between a story with plot, depth and mystery and a lot of mindless sex. Perhaps there needs to be a greater emphasis by the author on more story within the erotica that matches up better with the leading part of the story that takes the reader there.

It is a better work than the first in this series was, but overall the work still read very much like a Dungeons and Dragons adventure hyper sexualized. Comparing this work with the other series that Ubana appears in really puts to the fore that a good character in one series sometimes doesn’t quite make the transition to another well.