Thanks Given by TeraS

A Review of The Gender Swapping Succubus by Laurel Greene 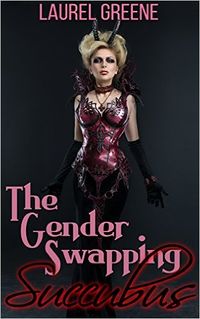 One of the most important things about characters in a story is that they have character. A personality quirk, some humour within them. A focus to them, something that makes them stand out in the story.

That doesn’t mean one shouldn’t try.

Saul gets more than he bargained for when he summons a Succubus who promises to make him irresistible to the opposite sex. (Un?)fortunately for him, she gets to decide what the “opposite” of his sex is, and her ability to shift not only her own gender but his as well leads to some certain sexy surprises!

Saul summons a Succubus who, almost instantly, knows what he wants and decides to give it to him. The Succubus has her way with him, soon becoming a she, and things are never going to be the way they were. For the Succubus, that is exactly what she wants of the deal.

The most interesting part of this work is all of the background that is told about the Succubus. In fact, there’s so much more about her than Saul that the work is more about her view of things than anything that Saul says or does. She has the most amazing sense of dark humour that put a period on her personality from the first words of the story. I liked how she was described, how she seduced her way into Saul’s mind, and how thing unfolded.

I thought that how she transformed Saul’s gender wasn’t quite what one might expect, that there was a certain flair to doing so that, again, fit into her personality and goals. There was some subtle, and not so much so, succubus mind control as well that I liked, mainly for when it wasn’t too openly pushed in the story.

The problem I have is a very simple one. The Succubus never has a name in this work. She’ always referred to as “The Succubus” and that got old very fast. By continually referring to her as such, in the moments when this term keeps getting used, and it is a lot mind you, the story loses a lot of what makes it what it is. A darkly humorous tale about a student that really should have known better and a Succubus who is more than willing to take, and give, as a result.

The erotica is of a hot flash nature, but there isn’t really so much heat as there is a focus on the transformation of Saul, how he becomes a she, and then the story abruptly ends with a stereotypical transformation, and a short note about what happened to Saul and what came after when the Succubus came back into his, now her, existence.

I would have liked a better ending than there is, mainly for how abrupt things end and how little of the “after” is told. Much of that could be said to be in who Saul becomes and that there isn’t a lot of story as a result. But there could have been something more than a few short paragraphs to close things out.

The writing is very good, especially the wry humour that threads its way through the story. Really that alone I found to be the most wonderful part of this work. There’s just something about a Succubus that is amused that I do enjoy. I just wish that she had a name.

Three out of five pitchforks,

Honestly, the humour I liked, I thought the Succubus herself was interesting, and along the way there was a story about her that was interesting. But the problem here is that the Succubus not having a name made the story awkward to read, uneven, and at times when knowing her name would have added a lot to the story, it didn’t happen.