Succubi Image of the Week 403

Did anyone ever teach Lost Girl about the Birds and the Bees?

A Review of The Magic Corset by Alina X 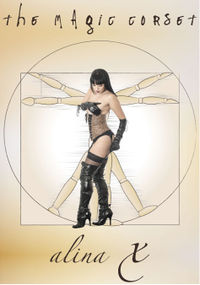 The Magic Corset by Alina X

A review of an anthology work today. There are very few writers that can tell stories about transformations, changes and magic well. Part of that is trying to tell the story about what happens in a way that doesn’t seem like the author is “telling” the reader what is happening but instead allowing the imagination to “show” what is happening.

Teasing the imagination, making the reader put themselves into the story and wondering, fantasizing about the “what if’s” and “what would I have done” moments makes connections to the story better, and that is a very special ability for a writer to have.

This anthology contains the following works:

As I normally do with anthology works, I will be reviewing the Succubus story on its own and then I will review the entire work as a whole.

Three foolish mortals summon a succubus, intending for her to do as they command. However, playing games with a succubus means that your rules are not hers and if you do not accept that, then the succubus has the upper hand from the first deal and then you should… Be Careful What You Wish For.

The succubus story is quite a bit different from the balance of the collection in that the story isn’t one of transformation or similar themes, but rather the way in which succubi know what others desire and use that to their own end and benefit. The succubus herself is never named, but considering that the three that summon her do not treat her as a person, rather a thing to be played with, that does fit with the story. The succubus physically has hooves and some of the features of succubi that I do not personally like, though there are some aspects of her physical form and personality that I did enjoy quite a lot.

It is very clear from the first words she speaks that she is intelligent, she knows the rules she is dealing with and more importantly, she knows how to use them and those around her to her advantage. There is quite a bit of verbal wordplay between the succubus and the mortals that are trying to trap her. I found that done in a deliciously diverting manner that ensnares them and draws them into her clutches. There is even a hint of some light succubus mind control and other powers being used which all work really well and heat up the story in a lot of ways.

The work is a slightly longer hot flash piece of erotica, not the longest in the work by far, but there is quite a lot of character development and story leading up to the erotica itself. Some of the erotica is quite violent and that didn’t do much for me, but as a whole I liked the majority of what happened.

But really the main thing for me was the power of the succubus herself, how she wields that power and what she is capable of doing. The story is short and ends at a point where I would have liked to see what comes next, but doesn’t. It is one of those stories where I wonder about what the Succubus will do and what the fates will bring.

For this story…. Four out of five pitchforks.

The balance of the collection are a series of transformational stories as a whole and what those transformations do to the main characters of each story. A theme that runs through most of them is a good, wanted thing which then gets turned inside out and upside down. A twist in the story that reveals that things aren’t quite as they seemed to be, sometimes with decidedly poor results for characters in the stories.

The other two stories really didn’t do as much for me however. Partly for one being very short and a bit on the horror side of things that i didn’t like very much, the other simply for the subject matter and that I felt somewhat disconnected from the story for some reason.

Overall, the collection is well written, the heat in the stories runs to a wide range of tastes and I think that it would appeal to many erotica readers in many ways. I do think that the author should think about taking some of these stories and expanding them into their own larger works, there is more than enough within them to make that happen and it would be interesting to see where things go from where they end here.

For the collection as a whole, three and a half out of five pitchforks.

An interesting collection of erotica that runs a bit hot and cold, but tells good stories and has heat to make them come to life.