A Review of From Spark To Flame by Vicky Payne

I’ll admit that this costume is just interesting enough

A Review of Ganged By Demons by Mina Wyndam 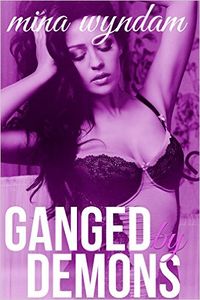 Ganged By Demons by Mina Wyndam

A review of another new series today on the Tale, but one that, at least for me, is lacking a lot of things. As the opening to a series there needs to be something there and a hot flash really doesn’t quite manage that alone.

To write a hot flash can be done with a lack of plot, character, and even, to a point, just be focused on the sex and nothing more. The thing is, if that is all which is offered at the beginning of a series, what is there to draw a reader back into the series when the next work appears?

Sex alone does not a series make, no matter how well written that erotica might be.

Lynette can’t get what she wants from just one man, or any man. The pleasure she craves can only be provided by demons. Her dreams summon them, and these bad boys literally from hell plunge her into the depths of never-ending pleasure, and claim her as their succubus.

Lynette finds herself surrounded by incubi who take her and use her in all of the ways that make her scream. Given a choice which isn’t one, she falls and becomes their plaything. For Lynette, that dream becomes her reality and more.

The work is a short, hot flash that moves directly into the erotica with little told of Lynette, the main character, and next to nothing about the group of what appears to be incubi having their way with her. There’s really no character development, no understanding of what brought Lynette to where she is, and overall it is slightly confusing.

Being a hot flash, Lynette is immediately at the mercy of the incubi, they doing all sorts of things to her, taking her further and further into her orgasms and then the story takes a slightly darker turn. The incubi give Lynette a simple choice, which really isn’t and she is then taken again, being changed into what the incubi desire of her.

As a whole the story’s erotica was somewhat stereotypical, the incubi were as well as a whole. It was difficult to care about what was happening because there wasn’t a lead into the story, it just jumped directly into Lynette being taken, over and over again. Her thoughts were more about what she was feeling, her mind being scattered, and just agreeing, or more accurately, pleading, for more from the incubi.

Being that the work was mainly about the erotica, and there was little plot or substance otherwise, that didn’t do much for me. This is not a good thing considering it is the first work in a series, at least from the note at the end of this work it is. It left a thin impression on me, I didn’t feel a need to continue in the series and that shouldn’t be.

There needs to be a hook in this work beyond the erotica. Telling something of Lynette’s life, explaining how she came to be with the incubi, even showing more about what happens to Lynette when she is changed in the story, beyond her hand changing colour, would add a lot to this work.

Focusing on the erotica alone isn’t enough and being as short as this work is does not help as well. More story, more depth, and more meaning would improve this a lot and, as well, I think help direct the next work in the series. I hope the next work tells more than another moment of Lynette being used by those around her. There’s more story here, it needs to be told.

All kinds of erotica, but little told of the characters, how things came to be, and little plot save for the sex. For a series that’s rather a thin thing and I didn’t feel like I had a connection to the characters or a desire to continue with the series.

More story among the erotica would be a good thing.