A Review of Ganged By Demons by Mina Wyndam

A Review of From Spark To Flame by Vicky Payne 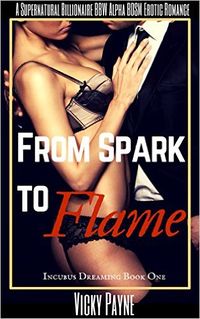 From Spark To Flame by Vicky Payne

A review of the first work in the Incubus Dreaming series by Vicky Payne today on the Tale. It is a story about an Incubus, a human, and the odd things that happen when one cannot believe in oneself… on both sides.

There are the things we see within ourselves that define who we are. If not to the world around us, then within ourselves. They speak of our insecurities, needs, hopes, wants and, if we allow it, our desires.

It is these things that shape who we are, not necessarily what we are. The two can be very different things if we are not capable of accepting all that we are.

Sometimes it takes shaking the foundations to be able to see there might be something more within ourselves if we are willing to try. It is the trying that is, after all, the most trying of times…

After a disastrous relationship with a con artist leaves her up to her ears in debt and doubting that love exists, curvy Abigail Crane moves to a coastal town to start over. When the reclusive Billionaire Caledon Ambrose appears at the architecture firm where she works, she’s shocked by just how attracted she is to the masculine, alpha male that he is. Still, she tries to ignore her silly crush on the utterly unobtainable guy, until she begins to have sizzling, electric wet dreams about him. There’s something more than natural about Cale, and she’s not sure if she wants to find out what. Abby moved to the coat to escape her past, but she never really believed she’d find her future…

Caledon Ambrose is over eight hundred years old, and jaded in every possible way. A half-incubus, he’s had plenty of time to earn himself riches, to experience every kind of sordid, depraved pleasure available to mankind, and come to the conclusion that he will spend his immortality alone. But a vision of a woman he’s never seen taunts him, and when he discovers that she’s the secretary of his architect, he’s more than shocked. Unwilling to admit the power a mere mortal has over him, Cale tries to convince himself she’s nothing more than a mousy, shy creature. But there’s something about Abby, and his mind reaches to hers and enmeshes them both in delicious, sensual dreams he cannot control. Will he be able to burn out his desire for her by experiencing these bondage fantasies with her? Or will they both spiral down into a whirlpool of passion that threatens to disrupt every facet of his existence?

Abby is firing her way back out of a terrible situation on her own. It isn’t just the things that happened to ruin her life, but more it was the words spoken that turned out not to be true that have done the most damage. Cale appears, there is a literal spark, and Abby’s dreams change. For that matter so do Cale’s as well. But it is Cale’s secrets that bind them both, even if neither can see the bindings themselves.

There’s quite a lot of world building in this work which is mixed nicely with some hot little flashes of erotica between the two main characters. As the story unfolds, the thoughts of both Cale and Abby become real in a lot of ways. By that I mean the characters have depth, purpose, and meaning in their own ways. It isn’t simply a matter of telling a rote story, aiming to push the two characters together. There’s a struggle, some moments where they clash, try to understand what is happening, and I liked that because it made for character development that I enjoyed.

Abby’s background is as detailed as Cale’s and it told a story that I think set out the rest of the book well, explained why she acted the way she did, and much of her own being. I enjoyed the fact her real emotions came out in the work, that she didn’t act the same in every single moment she appeared. More interesting was how her dreamself and her real self differed as much as they did, which actually brought me to wonder about exactly who Abby is. There’s a little bit of mystery around her, some of which Cale comments on, and if I am correct in my thinking, I think that’s the more interesting story to tell.

Cale himself is a part-incubus, and as such he doesn’t act as the stereotypical incubus might in a story like this. There is a moment when his true form appears, wings, horns and… hooves. While I don’t care for the hooves, the mental image is unique in its own way and that was nice to see. But he is very single-minded at times, tending to force away a lot of things that, given a clear frame of mind, he should realize means something to him. But there’s more “refusing” of his being in this work and trying to overcome the attraction he has for Abby than there needs to be.

It’s a battle of wills within Cale, and the end result tempers a lot of the story. I’m not sure that works well, but if there will be a second book, and it appears so, then that part of the plot arc will be interesting in how he deals with it. Coupled to that, there are a lot of little hints about Cale as well that don’t quite play out in this work. They are a clear hook into the next and I hope they are used well there.

The erotica falls into a series of dreamscapes in which Cale has his way with Abby, but as well, she responds to that in an active, not passive way, and it was that blending of dominant personalities that I think held me in the work. There isn’t so much a “use” on Abby as it is Cale being drawn to her, seeking out her needs and fulfilling them.

There are some minor issues in the work, a few spelling errors, but nothing serious. One section of the work when Abby was being pulled in several directions at once felt overdone and didn’t add a lot I felt to the story. But the erotica is well written, the characters are quite strong and powerful, and the story, while leaning on the rather popular “billionaire finding love” trope, manages to keep things from going over the top, becoming silly, or worse, a soap opera instead of a real story. Here story matters, it drives everything else and I enjoyed that a lot.

An interesting story well told. Good characters, a nice air of mystery, discovery, and in some ways, a hauntingly direct need to not believe in the possible. I like the beginning, I hope the follow book is as good as this one was.

Most of all, I want to see if my thoughts about Abby herself, the clues that I seem to see, are the ones that I believe them to be and where that takes both her and Cale.