A comparison of Succubus colouring

A Review of Muff Diving Massage by Katz O’Connor

A Review of Jade, Cody, And The Two Succubi by Joyce Melbourne 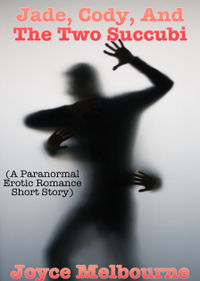 Jade, Cody, And The Two Succubi by Joyce Melbourne

Sometimes the events in a story are confused. By that I mean it is somewhat unclear to understand who, or more often, what they are at a particular moment. Sometimes the title of a story confuses things further when the reader expects one thing because of the title and instead something different seems to be happening in the work.

There can be wonderful heat, and a mystery to think about which both make the story better that’s true. But confusing the reader doesn’t always work well even if the mystery is supposed to do so.

When a couple finds their sex drive lacking, a nighttime visitation by a ghostly being or two, surprises them both.

Jade and Cody have been together for some time, but of late the bliss they have enjoyed is waining, ebbing away, turning to dust. A chance meeting over a newspaper and things change as a new entity enters their lives and kindles their passions in different ways.

Overall the work is a hot flash piece of erotica that reads more like a ghost story. There is a twist in the story that I thought worked really well at the end, but with that came a lot of questions and some confusion I felt in the aftermath of that. Some of the ideas and assumptions made in the story don’t quite fit with the story title and that’s a bit of a shame.

The main part of the confusion for me is in the story title which says there should be two succubi in this story. At one point Jade asks her unseen visitor if they are male or not and the answer given seems to say that they are male. As such, at least one incubus appears in this story. Later on Cody has some intimate moments with another being, and it’s quite clear that they are female. So, sadly, the title of this work doesn’t quite connect with the story itself.

Still, the story has a lot of mystery mixed into the erotica, which I liked, and in doing so a really good story comes into play. There isn’t quite enough time spent on the questions raised at the beginning of the story, and in part some of those questions revolve around the explanation of what an incubus is. It’s also a bit frustrating that nothing is mentioned about what a succubus is, and more importantly, if they are different in their needs and desires than what an incubus wants.

What results from this confusion and mysteriousness in the story is that the story gets pushed to the side when the erotica begins. The passions in those moments are wonderfully told, the characters change, slightly, but they do emotionally, and the twist in the story comes at a point which is unexpected and neatly told.

The problem is that while the erotica is well done, the story isn’t brought out as much as it could have been I think. There are a lot of missed opportunities to tell a wider story, to delve into the mystery of what is happening around Jade and Cody. The work reads very much like an opening chapter to a longer work that pauses on a revelation and then… it ends. That’s a shame and I do wish that the author had written more than what is given.

While this is a complete story as it stands, it is, tragically, far too short. The characters are well told, the mystery is fascinating and the questions left in the aftermath of the passions in the story are many and more. Building on all that is given would, I think easily, make for a far better and richer story.