A Review of Muff Diving Massage by Katz O’Connor

A Review of Evil Lust by Darla Dunbar 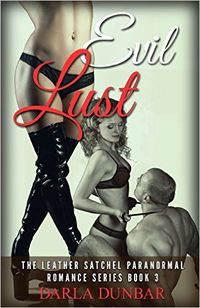 If a story summary mentions a succubus, a reader would expect that a succubus appears in the work they are considering. Beyond that, if the succubus in the summary seems to be a focal point of the story, then one might expect her to speak, be described, and if nothing else, at least be there in the story, to mean something and to do something in it.

However, when the succubus appears for two paragraphs, isn’t described, doesn’t say a word, and the battle with the heroine isn’t even described as well… That’s quite disappointing. When things like this happen my question is: What was the point of the succubus being in the story in the first place?

Henry and Claire are meant to be together. But a succubus has taken over Henry’s actions. Under her spell, Henry has succumbed to lusting after Charlotte, the human form that the succubus has assumed. If Claire were to find out, then their marriage will be ruined beyond repair. It is up to Valtina to break the succubus’ spell and clear Henry’s memory of any guilt that would haunt his love for Claire forever.

Valtina is working with others to stop evil from taking love away from the world. Being successful so far, she is given the task to save a couple who’s love is being threatened by a succubus. She is warned it will not be easy, that she is facing her greatest challenge so far and is determined to win for the sake of love.

I was expecting a story in which a succubus appeared, there was some kind of conflict followed by a resolution by the heroine to save the day and then the story would continue from there. I expected to learn something about the succubus herself, why she picked this couple, and even beyond that, an explanation about what else was going on with the evil that seems to be in this work.

I thought that as I was coming into this work in the middle of a series, that would be a problem, but there’s enough told about what is going on that I didn’t feel like I was lost in the story as a whole. Where I did get lost was how quickly the succubus appeared, then vanished, and the rest of the work turned into an extended love scene.

That’s a problem because, reading the summary, I expected the succubus to be core to the story, to be in the work for a significant part of it. I thought there would be a description of her, there isn’t only her eyes turning red is told. I thought she would speak, talk to the heroine, something, but that didn’t happen either. Not one word was spoken. Being that the succubus was supposed to be the equal of the heroine, I thought there would be some sort of battle for control, a moment where the heroine would be in peril, something. Again this didn’t happen. The “fight” was one sentence and then it was over, the heroine leaving to continue dealing with the husband and wife while another character was dropped in to deal with the succubus.

From the point of view of wanting to read about a succubus in some sort of way, this work didn’t manage that. Because of this, it was difficult to see the reason for the succubus to be in the story in the first place. This is not really a story with a succubus, it is a story with a passing mention of one.

Setting that aside, the balance of the work was uneven, the dialog was a little stilted, read oddly, and if you spoke the dialog out loud it didn’t really fit well. The story read very much like a romance novel with the heroine of the book being a voyeuristic part of the overall plot once her role in “saving” the marriage was over. There really wasn’t much that held me in the story, and even when more of the overall plot came out and some of the secrets of the heroine came out that wasn’t enough to keep my interest.

Little appearance of a succubus, a story that didn’t hold me. There needs to be more substance than just the erotica and here that wasn’t to be seen…