Can’t really see the sexy in this costume… 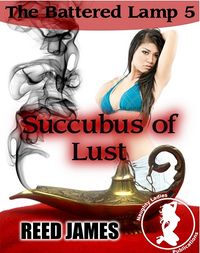 Succubus of Lust by Reed James

A work that is mostly a collection of individual sex scenes with very little plot or story to connect them is, for me, a rather huge turn off. I really do not like reading works like that because, honestly, it becomes boring, repetitive and most of all, that boredom just makes me want to finish the work as quickly as possible.

Sometimes as well, it is hard to enjoy a work when it appears in the middle of a series and some things are taken for granted by the author. Mostly that you have read the other works, but more that they need not tell you a lot about what’s going on. Considering that the plot is, really all sex, that does make its own sort of sense I suppose…

Kyle’s life changed when he awakened the sultry Genie Aaliyah from her thousand years of sleep. He’s married to Aaliyah and Fatima, spent a night of passion with his girlfriend Christy, and the busty Chyna is his first concubine.

But that’s not enough for Kyle’s harem!

He’s fallen in love with the sensual and graceful Fumi. But she hides a dark secret—she’s a succubus. And no mortal man can withstand the depths of her appetites. Danger and lust swirl about Kyle as he takes Fumi on a date.

And while Kyle dates Fumi, his girlfriend Christy meets with her Witch Coven. The lesbian witches are hunting for Aaliyah, and Christy has no idea that her boyfriend is involved with the Genie as she casts a scrying spell to find Aaaliyah.

Kyle is building himself a harem and in doing so he finds himself going out with Fumi. While this sounds like fun the truth is that Fumi is s Succubus, and things might be getting more complicated for Kyle and sooner than he thinks.

This is the fifth work in a series in which the main character Kyle has a genie and is getting all of the wishes he asks for. As it is the fifth work in the series, and the rest really has nothing that interested me in them, I only focused on this work alone because the character Fumi is, or appears to be, a Succubus.

I look for plot and erotica in some kind of balance or at least in a way that each strengthens the other, but that just didn’t happen at all in this work. Part of that I think is the author assumes that readers have read the rest of the series and as such there isn’t a lot of exposition about what has happened, why is it happening, and so on. There is a very quick setup in the beginning and then the work goes into sex scene after sex scene.

There are several things in the story itself that another editing pass might have caught, one of which is so silly that when I came across the mistake my reading came to a screeching halt as I tried to figure out what exactly the author was trying to say because it just didn’t make any sense at all.

Just really didn’t enjoy this work at all. It read very much like an adult film, lots of sex and the bare minimum of plot and that hurt things in a lot of ways. Of course it is possible that not enjoying the work is due to not having read the rest of the series, but that in itself cannot do much to make something I didn’t enjoy a lot better than it is. The author has done other works better than this and that’s the larger shame honestly.