A Review of Possessed By The Incubus by Victoria James

A Dream Shared By TeraS

A Review of The Unteleported Mage by Dou7g and Amanda Lash 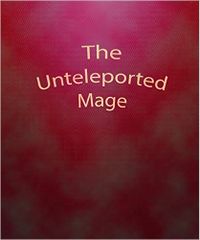 It is important to allow characters to develop in a series, and to do so in a way that makes sense for who they are and why they are there can be difficult. More so when the conflict between doing what’s right and trying to deal with one’s emotions are at odds with each other.

In this installment Magnus is out for a melancholy walk in the rain when he runs into a company of knights, a vanguard of an invading force. He runs for his life but he is woefully out of shape. Edmund, a fellow scholar and swordsman comes to his aid, and a battle ensues. Meanwhile Phil the Ogre and Lorelei the Dark Elf work out their differences. Later a trio of powerful mages arrive and it is up to Megan, Amy and the succubus Kendra to stop the forces of good from taking back the kingdom from “The Dark Queen of Demons” otherwise known as Megan.

Magnus is in the midst of a quandary when he encounters a new threat to Megan’s realm. The encounter turns towards the question of life and then the questions become moot. Edmund finds that he is more than he realizes while the rest of the assembled group tries to figure out where they all stand with each other in the meantime.

This work in the series actually turns towards some really fascinating theological discussions and I did quite enjoy the repartee which unfolded around Magus and Edmund. Beyond that, there is an encounter between Lorelei and Phil that runs the gambit from funny to serious and then ends on a note that I hope does bode well for the future.

But the focus of this work is upon Edmund, and in being so there’s a lot of character development that comes through in the story. There’s a moment where he comes to realize that he is more than he accepts himself to be. It’s possibly the most strongly felt moment in the series for him all things considered. With all that happens in the series around Megan and the development in her character and that of others, it’s good to see Edmund get his moment to shine.

As in all of the series, there’s a lot of fun, humour and double entendres that made me smile. As well, there are a few new characters that come into play here, all of which I think will add something interesting to the story to come.

Every bit of the humour, the story, and the characters that have been in the series so far. But also a turning point for two of them and what happens from here does make me wonder what will be coming next.

On Tuesday I will be reviewing the latest work in the series, Who’s Your Dryad and while I don’t expect the answers to the questions that have been building in the series, I am sure it will be a fun read…