A Review of The Unteleported Mage by Dou7g and Amanda Lash

A Review of Possessed By The Incubus by Victoria James 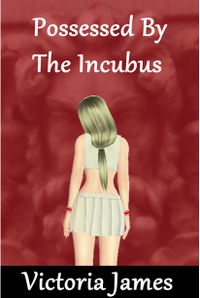 Possessed By The Incubus by Victoria James

One of the things that happens in stories where someone summons a Succubus or an Incubus is that there seems to be a deal struck of some kind or another. This, of course, always seems to lead to the character trapped in the deal trying to find a way out of it.

Sometimes there isn’t, sometimes there is and occasionally the resolution of that plot comes from a place totally unexpected. It is the making of that resolution and how it relates to the main characters that is important. Sometimes a single word is the answer to everything…

When the ugly goth girl blossomed into a voluptuous stunner over the summer, chaste eighteen year old Maria knew something was up. She convinced the school delinquent to plunder her locker for the secret and he gave her a book of mystic spells. So certain she was that the book was a fake, Maria tried out the ritual for a laugh and found to her horror that it was real! With a demonic creature demanding her soul, can Maria offer him something else in exchange?

Maria has noticed that Lilith is a lot more popular and a lot more curvy that she was before. Seeking out the reason why, she makes a deal with Garett and discovers that Lilith made a deal with an Incubus. She decides to as well, but finding the cost too high, she is trapped and has no choice but to give into the Incubus as he possesses Garett. But that’s not the end of the story as the surprises are still to come.

As a whole the work is a series of hot flashes that work their way towards a conflict where the Incubus appears. When Maria finds out that the situation she finds herself in is very real, she has little choice but to agree to the demon’s terms. That draws Garett into the web and then things become heated, but also the truth comes out as well.

The first third of the work didn’t do much for me, really it was a series of sex scenes loosely tied together which drove Maria towards her summoning of the Incubus. The middle part of the work, where the deal is struck and then Maria tries to find a way out is rather telling about her personality and did have some moments that I liked. I will note that the Incubus is rather stereotypically evil, hooves and all, and that’s a bit of a shame. I was expecting more, but that didn’t really come out of the story and I don’t think it was meant to either.

The last part, where Garett is possessed and the Incubus has his way with Maria through him did have some nice heat in the story, quite a lot better than the earlier parts as a whole. The twist in the story, which really wasn’t all that obvious and did add a nice turn that wasn’t stereotypical I thought was well told and made a lot of sense. Beyond the climax of the story, it ended a bit too quickly, which I thought was a shame. There could have been a bit more I thought, and at least I was hoping for the appearance of Lilith as well if for no other reason than to see where that might have gone.

While the characters were good, there are several spelling mistakes in the work, some of them very obvious and in capital letters no less in the story. It is also quite short considering the building up of the story that happens at the beginning. I think another ten pages or so would have added a lot to this work, certain could have made more story and a bit less erotica. It’s a fine line, but in this case I think that line needed to be walked further than it was.

A good read with a cute ending that made this work more than simply a hot flash, but not by much. Another editing pass is needed for the spelling mistakes at least and it would be nice if the story didn’t come to such a quick ending after all of the buildup in the story.