Succubi Image of the Week 401

Is cherry the favourite smoothie of Lost Girl?

A Review of Getting Freaky by Belle Payne 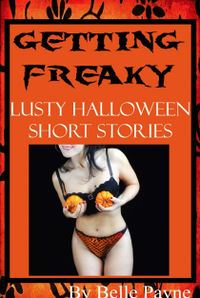 Getting Freaky by Belle Payne

One thing that bothers me when some collections of stories appear is that many times the ideas in the story are so good, so well told, that they honestly need to be turned into longer stories… but aren’t.

It is a shame when a universe is created where the characters have so much background, drive, and purpose and the story itself cannot hope to hold them into a short tale about them. In these cases the saying “less is more” really doesn’t apply, nor should it.

But then the problem is the “more” isn’t there to allow the work to become all it seems to want to be.

The work is a collection of two stories:

Two short stories in one book. Time to get your Halloween Freak on.

As this is a collection of stories, I will review both of them and then give my rating of the book as a whole as the works in the collection both have some kind of Succubus or Incubus connection.

The first work tells the story of a witch in a really bad mood getting revenge on her roommate by using magic, a bit of sex demon possession, and a lot of sex. While that description is rather blunt, as a whole that is really what the entire story is about. There are some very good twists in the story and Ann’s personality is something to behold which adds quite a lot to the story.

As part of the story, another student is possessed by what is described as a sex demon, but I tend to think of them as an Incubus if only tangentially so. There isn’t much in the way of a character for the incubus as mainly the only purpose is to drive the erotica of the story forwards as quickly as possible. Regardless of that, I thought the concept was an interesting one and how that turned into the erotica in this story came out really well.

The erotica includes a bit of mind control, which actually was hotter than I expected it to be. It is a bit over the top as a whole leading into the ending which just made me laugh, especially the last sentence of the story which just fit Ann and what happened in exactly the right way.

But the story is very short and that is a problem because the setting up of the story, of Ann, her roommate and so on really lends itself to a much longer story and I think that it’s a shame that story didn’t come out here. There’s a lot of richness in the characters, Ann especially, and I think that would make for quite the interesting story.

The second story tells of Ruby, a creature that seems to be, in a lot of ways, a Succubus and how she deals with a “problem” at the strip club she appears at. The work is a bit heavy on the horror, but not awfully so, and there is just enough erotica to smooth out some of the most “horror” moments in the work.

The story focuses mainly on Ruby herself, what she looks like, how she acts and more. She seems to be a Succubus and as the story unfolds that becomes more likely through the erotica, which has a very Succubus feel to it and into the horror part of the story which arrives at the end of the work. Together they seem to paint Ruby as a Succubus, but she isn’t a stereotypical one. There’s something more about her, something different and that is just touched on slightly as the story progresses.

Overall I liked Ruby’s story, the telling of her thoughts, the little we learn about her, more than the erotica itself. There was a good building up of her character in the story, but then it quickly turns to the erotica and at that point things become a bit less interesting in the drive towards the horror aspects of the story.

That’s not to say I didn’t like the story, actually I did, and I think it is the better of the two in this collection by far. The promise of the beginning just comes up a bit short because the story itself is very short and any character development gets lost in the erotica. Like the first work, it feels like this is the opening chapter to a longer story and that would be nice to see someday.

It’s a shame that this work is so short as either of the stories in the collection have quite a lot going for them. Either could have been turned into a work on its own, and honestly they should be. The concepts are just too good, the characters too interesting to just leave with these short tales about them.