A Review of Seducing the King of Sin by Ella B. Wilder

Lose the cape and this has possibilities as a costume

A Review of Succubus Week: Monday by Lisbet Laire 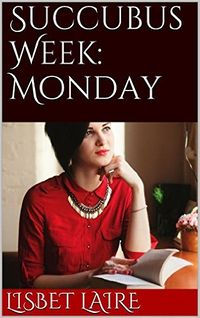 The beginnings of a new series called Succubus Week this time on the Tale for review. I do enjoy stories where the main character, if she is a succubus, doesn’t play the game one might expect of her. I like to see personality, passion, something good within with a purpose. Having that makes the story itself so much better.

With that I like to see some world building, something that acts as a hook and drives the story forwards as well. The thing is, when the core of the story centres on what is, really, a wonderful bit of succubus erotica and mind control, there tends to be a little time to get deeper into the story. It’s more of a problem when the ending seems to be rushed and only a pale shadow of all that came before.

Adrienne is hungry. As a succubus she needs to feed at least every other day and today she’s decided to have something along with her coffee.

Adrienne wanders off her usual path to work on a rainy day and visits a lovely little cafe with even lovelier humans there. One catches her attention and soon they are having a wonderful time together… At least until Adrienne must get to work and then things aren’t quite so warm and sunny for her.

Adrienne is really quite the interesting character as a succubus and that is mainly in how she acts, what she does, and the encounters that she finds her way to. There’s a lovely attraction to her in how she thinks, the way she sees the world and so on. It’s a wonderfully descriptive, telling way and it adds a delicious level to the work that I found captivating.

Beyond this, Adrienne isn’t stereotypical, though I will admit her having fangs was something I didn’t care for much. However, the lovely subtle bit of succubus mind control that comes in the story, how that leads to a hot flash encounter that tells so much in the description, serves to make that part of the work wonderfully hot and quite enjoyable.

The preceding part of the story, leading to the encounter, I think was just about perfect and had the right mix of telling about Adrienne, exploring her world a bit, and then leading into the erotica in a way that wasn’t heavy-handed or odd. However, the parts that came afterward didn’t quite have the same.

The post erotica scenes explain, to a point, what Adrienne does and follows her into dealing with a situation. The thing is that there’s not all that much detail, it seems a bit rushed, and there’s something missing in the entire scene. A bit of meaning, or purpose, because it felt like Adrienne had lost control of things to an extent and that changed her personality. But it was the ending, the least page or so, where it felt like the author just closed off the story in a hurry and I’m not sure why. Personally I think there could have been more, or even ending this part of the story post succubus feeding might have been better.

Overall the writing is very good, nothing took me out of the work, but there are a few minor word errors that cropped up here and there, such as:  “She tried not to role her eyes to visibly.” A minor thing, but it stood out at a point where it was very noticeable. The other such points were more hidden and not so jarring, but that one was to me.

I would have liked more about what Adrienne does, who she is, and what she’s like outside of her stop at the coffee shop and getting into her office and then being off to deal with a problem or three. I would hope that in future parts of this series we learn more about her, her past and what she is involved in. This might be a series of hot flashes, but I’ll hold out for something more than that.

I do look forwards to seeing where this series goes to, Adrienne is interesting, and while we know much about her, there’s so much more than has not been touched upon. Finding that out, in time, I think will make for something wonderful.