And Now the News… – Part III By TeraS

A Review of Succubus Week: Monday by Lisbet Laire

A Review of Seducing the King of Sin by Ella B. Wilder 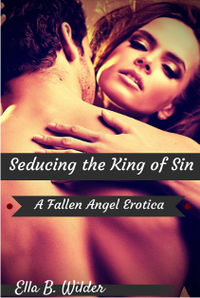 Seducing the King of Sin by Ella B. Wilder

It is important that the core of a story matters. It has to matter to the characters themselves of course, but it also has to matter that what happens in the story makes sense, feels right, and, at the best, tells a story that is something special.

Sometimes Succubi appear, more or less, in such works. Sometimes they don’t. Sometimes they are simply a means for emotions to be brought out of the main characters and then, hopefully, that takes the story somewhere unexpected.

Sarah has a debt to repay, and the only being that can help her is the Devil himself. And so she calls upon him in a desperate plan of seduction. Only, as the two get closer, Sarah sees another side of him, and begins questioning a plan that will force her to betray his trust. Will Sarah fulfill her plan, even if it means losing the one person who can satisfy her?

Sarah made a promise, a dearly held one, but there is only one way to make it be true. A deal is struck, but then the deal becomes something more, something unexpected and then she has to face the most important question of all.

The telling thing about this work is the focus upon keeping a promise. That it matters, more than yourself at times, and what a promise like that can and will do.  It says a lot about Sarah herself in the story that her motives at the beginning are held tightly, but when reality sets in, when she finds there is something more that could be, she gives that a chance, looks at the possibility, and takes that regardless of what may happen.

The depiction of Luke, otherwise known as the Devil, is interesting in that he isn’t stereotypical. I found that to be a refreshing change of character and it allowed for some well told development to occur. The story he has, who he is, what he claims to be, plays against Sarah’s own fears, wants and beliefs in some interesting ways.

There is mention of Succubi, a very short one, and there is one redhead named Nikki that appears for an instant as well. Overall they are all just creatures of sex and not much else at least from their actions and attitude in the story. But then their appearance really is meant to drive Sarah’s thoughts in a particular direction. As such, they aren’t all that important to the work, nor really, when I think over the story as a whole, does it seem like they needed to be honestly.

There is a scattering of erotica in the work, some of which I enjoyed, some of which didn’t quite have a lot of heat in the moment. The story is well told, the characters are interesting and written well. But the work ends on a note that is a bit sad and I felt as if there was a part of the story that wasn’t told. I would have liked to have seen more about why things are as they are, but also I wanted to see exactly who Sarah made her promise to. That never happens in the story and considering what happened to them and why, it would have been good to have seen.

Really a heartfelt story about a wish, a hope and a promise. I’d like to see what the future holds for them all, perhaps that will appear sometime.