Where were the sharks with frickin’ laser beams attached to their heads on Lost Girl this week?

A Review of Sinful Secrets by Jenna Wells 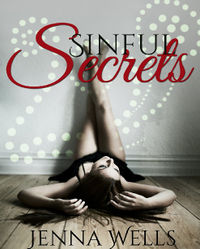 Truth is a hard thing to deal with. To find out who you are, but also more importantly, to find out what you thought was your own truth really isn’t is sad. What’s sadder is finding out that truth and coming to the realization that it is ashes and emptiness.

Not all stories have happy endings. That’s part of how things are. But a story that just has loss and emptiness from beginning to end just doesn’t really work for me.

In all of that loss, there has to be a glimmer of hope.

Hannah is losing her mind. That, or there really is a strange, handsome stranger in her office that no one else can see. Just what she needs, on top of juggling accounts, accommodating a cat that she’s pretty sure hates her, and, oh yeah, finalizing that pesky divorce (with her coworker).

When she spends the night with this mysterious stranger, however, she discovers that the most sinful secrets may in fact be her own.

Hanna’s world is in upheaval. She’s in the middle of a divorce, the past year has been hellish, and it doesn’t look like it will get any better any time soon. A man appears in the midst of the maelstrom around her and… things are exactly what she thought they were. Not even close.

The one overriding emotion throughout this work is one of crushing sadness. It sits like a dark cloud over every single character in this work and… it becomes tedious. Seeing not one character have an emotion of joy or light around them is draining and just took so much out of the work by the time the reveal about Hanna comes about I honestly wondered what the entire point of the work was.

I think that the summary of this work doesn’t really do the story any favours. It’s a bit misleading in some very important ways as the story unfolds, it doesn’t really portray what the connections are between the characters in the story either. As a whole, considering the secrets that come about, it’s as misleading as Hanna herself is from start to finish.

The mysterious stranger is named Damien, and of course he is basically an Incubus. He’s almost a stereotypical one in that he really seems to have the overall attitude of not caring about much of anything… save for Hannah… and that’s where the twist in this story comes into play.

What follows from there is a confused recollection of events from Hannah’s point of view and the reality seen from Damien’s own. There’s a huge disconnect that comes into play and when the truth is finally revealed I can’t say that it was much of a surprise as it was obvious almost from the beginning of the story.

There is some heat in the story, but honestly it’s doused by the rampant sadness around Hannah and Damien. There is a bit of mind control in the work, there is a bit of a mystery as well, but in the end emotionally… it isn’t satisfying. It’s missing the slightest glimmer of hope throughout and when Hannah discovers what her connection with Damien is, it’s far too late and everyone and everything is ashes and wasteland.

While it is written well, there are several points, notably in the climax of the work, where a jarring wrong word appears. For example: “He’d come to see my while Henry worked late.” The mistake is obvious and as it happens in the instant when all of Hanna’s truths are laid bare it really took me out of the story at the worst possible time.

I think that the universe is interesting, there are some truths about Damien, about Succubi and Incubi that are telling. But those truths lean on the need to use some stereotypical views on Succubi and Incubi. I’m not sure that needed to be for the interplay and background around Hana and Damien. That part of the story I think could have been more focused on, more tightly spoken to for the better of the work as a whole in spite of the clouds of guilt, sadness and loss that made of most of the work.

It’s sad. So desperately sad from beginning to end and that, for me, I found to be hard to take. The world isn’t perfect I know and neither are all of the characters in this work. But loss isn’t everything nor should it be what makes the fabric of one’s existence.

There’s more than that, the trick is finding it among the wreckage left behind.