And Now the News… – Part II By TeraS

A Review of Hotel Desire by Anya Merchant

A Review of Worshiping Wanda by U. R. Knickers 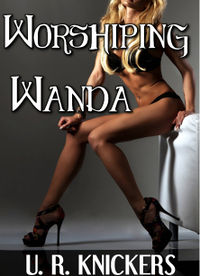 Worshiping Wanda by U. R. Knickers

As a whole, I understand that, for the most part, Succubi and Incubi, are seem as being the means towards an end. That, in general, being a sex scene of some description. The thing is that when that happens, story doesn’t, characters are nothing more than objects, and overall the story just means nothing save for a hot flash.

Wanda was quite the woman–and then some. Of course, being hot never stopped guys from breaking up with you. Despairing over her latest romance gone awry, Wanda prepares a hot bath, some sexy lingerie, and a silicone boyfriend. She has everything she needs for a sexy night in, until a naked stranger appears, one who swears his only desire is to pleasure her. What will Wanda do?

An Incubus is sent to comfort Wanda in a time of need and finds himself placed in a situation he has never been in before. Wanda isn’t like anyone he’s encountered before and she surprises him in many unexpected ways. The most surprising is that Wanda gives him a name.

Wanda gives the Incubus his name Deimos, which for him is quite a surprise. No one that he has encountered in the past cared about a name, but then neither did he. While Deimos describes himself as an Incubus, his appearance is slightly murky, Wanda is a far more clearly defined character overall.

Wanda’s physical differences are brought to the fore throughout the story and Deimos’ reactions to her, and the desires both he and she encounter are explored in many different ways. While the erotica focuses on those differences for the most part, there is also a good deal of connection made between the two which grows into something more over time.

The work starts out well and begins to tell a story about the unnamed Incubus in the beginning watching and wanting to pleasure Wanda. It then changes as he is discovered, made to come to terms with Wanda, and then the pair take their pleasures from each other in all sorts of different ways. The work changes into a hot flash with some twists in it, and has some good heat as well.

Beyond the erotica, at the end of the story, there’s a surprise unexpected for Deimos and with it comes an opening towards more story… But the work doesn’t go there. The tease is offered about what might happen next, but that is never realized and the work comes to a close. It’s a shame really because the two characters are more interesting than what their sexuality is, but the story focuses on that more than the characters much too quickly.

Overall, there is a lot to like about this work, but there are a lot of questions left unanswered for the purposes of getting to the erotica. I would have liked to know more about Deimos than what is revealed. The same is true about Wanda. She is there, in the story, but her history is murky and that bothered me.

It’s one of the more unique stories about Incubi that I have read in some time. The background on both of the main characters is rather sparse in order to arrive at the erotica and I think that harmed the work in many ways. Lots of questions, somewhere to go with the story, but… it doesn’t quite get there for the erotica.