And Now the News… – Part II By TeraS

A Review of Succubus: An Adult Roleplaying Game by ManofDawnLight 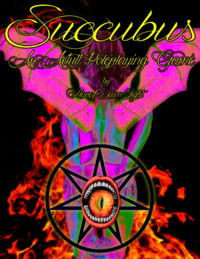 I recently came across a sourcebook for a role-playing game in which Succubi appear. I thought this was an interesting concept, and decided to look further into the game, the universe and the particular focus it has.

Overall, the background created is really quite interesting, the sample characters familiar, but a little bit changed to fit the game universe, but not in a way that made them unrecognizable. However, the work does quite clearly have a particular view of the succubi in which they are evil and cannot be anything else. That seems a bit limiting to me, and I don’t quite see why that needs to be.

An adult Tabletop RPG where you can roleplay being a sex demon from hell. Create your horrible demon form, your supernatural powers, and decide exactly how your Succubus finds victims and sucks their souls out of their groins. This is a one roll, one dice system for ease of gameplay.

The game is adult themed in which players can roleplay as various sex demons, including succubi, or as humans upon whom the various demons are attracted to. Players create a character which includes their individual powers and abilities. Once in play, succubi characters seek out other characters, whether human or not, and using various methods, claim their souls in the game. The system of play follows a one roll, one dice system for simplicity as the author believes that speeding up the game is a good idea and using a system like Dungeons and Dragons is a slowing force in keeping the game moving.

Gameplay focuses on the creation of a character, generally some kind of sex demon, but not necessarily a Succubus. As described in the game, players act as if “…you are sex. You are an animal. You are evil. You represent all that which we fear to release, and you can and will force others to enjoy their feared desires too.” Once the character is generated, the actual gameplay is very fluid and be taken in whatever direction players wish to. Many different scenarios are possible, besides the obvious one of a sexual encounter. Accordingly, there are many aspects to the succubi and players choose where the gameplay will go.

The game author provides a very detailed description of the game universe within which players are set in. A history of the coming of angels and demons is told, the results of the creation of Hell and its aspects, and then the work focuses upon the history of the succubi up until the present day. However, in short, the purpose of the succubi is to claim souls for themselves, to increase their power and standing in Hell by doing so. There is also a detailed list of well known beings, their personalities, physical description and so forth. In this game universe, there is a Lilith, described as the first of the Succubi who is beholden to their King, Asmodeus, within the game universe known as the Prince of Lust.

The thing about this game is that succubi are stated to be evil beings and there’s really no other option in how to play them. I think that’s a shame as, at least from my perspective, doing so limits players and their characters. Even Dungeons and Dragons allowed for one succubus to become a Paladin, and be “good” though it was a battle for her to do so.

I just think that’s much more interesting a character to play than one who’s focus is just on approaching another character, pulling them aside, and then having sex with them until they consume their souls and move onwards. Yes, that is one sort of character, but they don’t all have to be that way.

However, setting aside that issue, I think the universe that the author created for this game is very well done, is very detailed, the description of the universe runs well over 30 pages, and I found it fascinating. Just to see how the author has changed certain well know names, such as Lilith for one, is striking and does make one think about how they would be in this game universe.

While the game rules are clear, and seem to be relatively simple to follow, there are a scattering of spelling mistakes here and there, mainly appearing in the flavour text. They are minor and do not really take anything away from the stories told in them. It is very clear from these short stories, or hot flashes, the intent of the succubi and how evil they are in this game universe as well. Still, I feel like there’s too much emphasis on the succubi being stereotypical in their main needs which doesn’t quite ring true with the character outlines offered towards the latter part of the book.

Still, there is the possibility of changing the basic universe, to warp it to the will of the players in whatever way they wish to. Things are not set in stone, there are options and I think that’s a very promising thing. It is a rich universe to play in, it should be used to the fullest.

An interesting game universe which has some quirks in it that gave me pause. But things are changeable and that interested me more.