A Review of Succubus: An Adult Roleplaying Game by ManofDawnLight 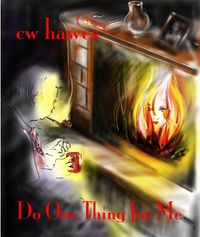 Do One Thing For Me by CW Hawes

Sometimes the hardest stories to read are the ones that speak about our own mortality. Of what happens as our lives and loves come to pass and what happens to those that survive that moment.

The question of what we think reality is, what it actually is, and what it might really mean are, sometimes, three different things. It is in the discovery of this that comes something that one cannot be sure is truth or a consequence.

There are many things we take for granted. Breathing and memory being two. That is, until illness makes breathing difficult and our memories begin to falter.

George, at eighty-two, is consumed by grief for his dead wife and struggles to come to grips with the onset of dementia and his failing memory. Until he meets the mysterious Beth, who promises to give George what he wants. But the question he wrestles with is she real or just a figment of his senility?

George is a soul who’s life is turning towards loss of his love, loss of his memory and the confusion that comes with that. In the midst of trying to come to grips as best he can with how things are, Beth appears and offers herself and a promise. But is anything real or are things much too real in truth.

As a whole this is a very sad and mournful story which was, for me at least, quite difficult to read at times. The suffering that George faces is very strongly told in this work and with that comes a great deal of confusion, uncertainty, loss, and grief. This appears on every page of the work and as such it puts the story into a bitterly painful situation that, from the beginning, cannot end on a good note.

In the midst of all that George suffers through, Bath then appears and, eventually, she claims to be a Succubus and offers his fondest wish for a price. It is never really clear if Beth is real or not, though the hints seem to turn towards the former possibility. While she is a Succubus, her erotic aspects are very limited and in a story like this, that seems to be the best way to deal with her being part of this story. She offers an option, a possibility, which at some points is very sexual in nature. But it is her continued approach to George, wearing at him, that brings about some of the most powerful moments in the story.

It is a series of moments in George’s life, the little things like his cat, going to the store, seeing others in the streets and elsewhere, that are painful and touching at the same moment. It is really very sad how the story plays out, what happens to George and his grasp on reality. The work is quite possibly the saddest story I have ever read and I think that is because, in a lot of ways, it hits a bit too close to home.

I find it hard to enjoy works that have little hope in them, little to offer in the way of something that has some light to bring to the story. It takes a very good author to keep me in the story, to allow it to unfold and to see the story for what it offers. This author managed to do so, mainly in keeping a small glimmer of possibility open in the work through the end.

That ending is, like the rest of the story, somewhat unclear and uncertain. It could all be in George’s mind, it could be very real. It could be both and neither. The ending leaves questions and a feeling that is very hard to shake off when the story is done.

As a whole this work is a difficult read in that the grip that George has on his sense of reality is felt very deeply in the story. This tends to make the story sometimes confusing, occasionally awkward, and in that the reader is meant to try to see what is real and what isn’t. It is the attempt in uncovering the truth for George that perhaps the truth is something we find in ourselves.