Lost Girl Returns: or Why the Dent in My Desk Is Getting Bigger

A Review of Wednesdays with Mr. Better by Khandi Leeker 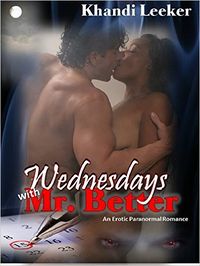 A review today of a new series in which the main characters are a succubus and the incubus mate that she accidentally has brought into being. That concept by itself is interesting and along with that should come some heat, some questions, some conflict and, if it is possible, some history to be explained.

While that all comes out in this, the first work in the Khandi Tales series, there’s something missing. While there is some heat and some answers and, yes, some conflict as well, the issue is a lack of connection. That comes in both the main characters themselves, but also in keeping my interest in the work and I don’t quite understand why that happened here.

Dirkland Better’s life has changed for the weirder. After one ill-fated sleepover with a succubus, he finds himself gifted with some insatiable abilities. Dirkland must learn how to deal with his Wednesday transitions and his devilish mate as he maneuvers through his new found gifts.

Dirkland has a one-night stand with Khandi and discovers that he isn’t the same person he was. Now an incubus, learning that Khandi is a succubus, is the beginning of his new life. A series of missteps, errors in judgement, and a lack of information draws them both together and reveals that the one night stand isn’t. It is, seemingly, for always.

The work mainly focuses on Dirkland as he discovers what has changed about him, who is responsible for that, and how it effects him. There’s a good deal of story wrapped around this plot and in being so, quite a lot is told about Dirkland himself. As a result, by the time the final page of the story appears, it’s difficult to like him as a character for several reasons.

One of the main ones, at least for me, is that he seems very cold, almost calculating at times, and I just could not find my way into caring about him very much. There’s an emptiness within him, something missing, that hovers over him throughout the story and being so, just made it a difficult story to read at times.

This isn’t just from when he becomes an incubus, but rather it is part of his character for the first page to the last. While his personality shown to the world has its moments, hearing his thoughts, listening to him berate and mull over how he sees others becomes thin over time and I felt took away much of the story’s impact and, to an extent,the erotica when it appears. Being that he is the main character, at least in this work, I wanted to like him, to care about him. If his entire reason for being seems to be what I think it is, that’s disappointing.

Eventually he transforms into an incubus, through the actions, or rather, errors of Khandi, and there isn’t much of a change. As an incubus his personality is ramped up to an extent, he is a bit brutish, wild, and uncontrolled. I pause at calling him a stereotypical incubus, but it is a very close thing. His physical form is, for the most part that, but there is the barest little piece of who he is that manages not to fall over the edge into being stereotypically evil, or otherwise.

Khandi, the succubus of the work, is in a lot of ways a mirror to who Dirkland is. She’s brash, single-minded, thinks she knows everything, or as much as she needs to and that’s the problem. Khandi is a wild creature who seems to take a lot of risks for no real gain and, in the cases of Dirkland, that comes to bite her badly. This sets up a series of events that tie the two main characters together very tightly which one expects might lead to some character development for them both.

While we never see Khandi’s succubus form, it is made clear she is a succubus, but is a bit different. This is more in how she seems to put up walls around herself, as much as she can, and then, when she stumbles, cannot find the answers she needs, going off to try as she can to keep things together.

It’s a shame because the questions about her past, how she became a succubus, where she came from, who her father is, all of the minutia that makes for a more well told character is kept just out of reach for the sake of keeping the story moving forwards as quickly as possible. She pops in and out of the work, driving Dirkland’s story onwards, but there isn’t a lot of time spent thinking, more acting and there needed to be more of the former. To be clear, she doesn’t seem to be stereotypical in nature, just dislikable at times and she didn’t need to be.

There are a series of short hot flashes with regards to the erotica which simmer, but don’t really come to the boll that I had hoped for. Much of that comes from the disconnect I felt with both Dirkland and Khandi. It’s difficult to enjoy the heat when the personalities keep dumping cold water on things.

Overall, the work is written well, the characters do have some promise in them, but there is just something about their dialogue, their internal monologue, and how they express themselves that didn’t work for me. There is a hook however, a strong one, and I want to see how that unfolds. I’m hoping that future works in the series flesh out both Dirkland and Khandi as much as possible, giving them more than the dark clouds that hover around them. It need not be the happiest of stories, but making me care about them both would be a good place to start.

As good as the concept is, as well fleshed out as both Khandi and Dirkland are, there’s just something missing in both of their characters that makes it very difficult to connect with either of them, or to like them. That isn’t exactly a requirement to be clear, but it makes for a better read and, in the case of the erotica, a hotter one as well.

There are at least two further works in the series to come, one in November 2015, the other is scheduled for January 2016. I will be following this series as there is something about it that holds my attention in spite of the blandness I felt towards both main characters.

I hope that telling more of the background, of the history, of the universe in which they live in, will overcome that.