A Review of Jackalope Season and Other Bizarre Little Tales by M.B. Manteufel 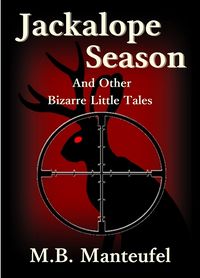 Jackalope Season and Other Bizarre Little Tales by M.B. Manteufel

The thing about horror stories is that there is a fine line between story, which a work must have, and horror, which cannot take everything away from the story itself. It is a fine line to walk and for myself there are very few authors that I have read that can manage that balancing act well.

Sometimes what’s needed is a bit of light-hearted fun in the midst of all of the darkness. A moment where the horror isn’t found in the beating heart on the floor, but in the hands of hairdressers that wreck the day of a Succubus and send her to see the Devil.

The collection is described as:

Jackalopes are vicious, wily creatures. At least that’s what Kate was led to believe one hot, humiliating day as a child. Now, of course, she knows better, and on a good day can even laugh at the memory of that family vacation. But Kate doesn’t always have good days. And some memories demand much more than a chuckle.

So begins this collection of nine twisted and disturbing tales penned by thriller writer M.B. Manteufel. Monsters of both supernatural and human varieties play out their odd, often terrifying, scenarios in stories that take the reader beyond belief. A few lighter moments are provided to bring the reader back from the edge . . . but only long enough to catch a breath or two before descending deeper into the darkness.

As always with anthology works, I will be reviewing the Succubus story on its own and then my thoughts on the anthology as a whole.

Bad Hair Day is the Succubus story of this collection and it tells of what happens when a Succubus named Serena has a major hair problem and goes to the Devil to complain about it.

As a whole, this particular story is the most fun in the collection in that it isn’t about anything really evil or horrific but rather tells the story of a particularly vain Succubus who decides that her hair has been ruined by the hairdressers of Hell and takes her complaints to the Devil. There is some wonderful silliness in the story, Serena herself made me smile and occasionally laugh which when compared with the rest of the collection really needed to be. It’s a bit of light hearted farce in the middle of what otherwise are a lot of deeply dark stories and helped change my mood over the collection as a whole, but I’ll get back to that.

Serena herself is a Succubus, there’s no doubt at all about that, but as well she’s not quite the stereotypically evil sort of Succubus. She is a bit more self absorbed, she thinks she has everything under control and that causes her to make a few mistakes in front of the Devil and he, of course, takes full advantage of that.

The ending I thought was very apt, very cute, and it leaves a lot of questions unanswered. In the case of this story, that’s alright as there really isn’t a lot of need for background about Serena or the world she lives in. It’s the interaction between herself and the Devil that drives this story and it makes Serena one of the most unique Succubi that I have read in some time.

Just a really wonderful story that I enjoyed very much. I would have liked to see more about Serena, possibly the events that lead to her Hellish Hairdressers doing what they did to her, but regardless, it was a lot of fun.

The collection as a whole otherwise tends towards some very dark themes, events, and characters. Some of the stories are just vague enough on details that imagination fills in the gaps and some of those gaps do lead you towards some very troubling mental images.

There is a good deal of thought in the collection towards the darker emotions, drives and insanities which hover around the edges of humanity. The author tells a very good ghost story filled with many characters, plots, and events that combine into a series of strongly told horror stories. For those the like their horror a bit more bloody, violent, and destructive, the stories do have that in them.

Personally I don’t enjoy horror stories that go to the limits of horror, and in my case, there are but three stories that pushed the boundaries of what I like. Overall the true horror is kept just on the edges of the story where it sneaks up on you and as a whole that does tend to be the better way to write such works I think.

I’ll give the collection as a whole three pitchforks out of five.

A bit too much horror for my liking, but the writing is solid, the characters are interesting and that makes up for a lot of my personal squeamishness.