A Review of Synthie Recalibrated by Alina X

A Review of The Succubus Next Door by Remo Santomauro 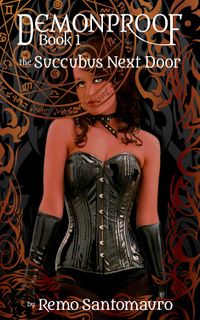 The Succubus Next Door by Remo Santomauro

A review of the first work in a series called Demonproof this time on the Tale. This appears to be a three book series in which one of the main characters is a succubus and she is quite the force in the first work.

One can make mistakes when summoning a succubus. A word misspoken, a thought out of place. There is also the chance of something happening that is unexpected and finding one is being confronted by a succubus who is none too happy about what you did.

When that happens, all of the tricks come out, and the summoner can be the slave if they are not very careful and lose themselves to their lusts, wants, and fantasies.

Awaked by a disturbance next door, Rick goes to check on his hot blonde neighbor, only to discover that the amateur witch has summoned a demon from the Seventh Circle of Hell.

When the seductive succubus breaks loose, and tries to drain Rick’s life force, he has to battle the beautiful, treacherous creature in the depths of his mind while immersed in his greatest sexual fantasies.

With the aid of a powerful artifact, Rick turns the tables on the devious, red-skinned beauty, and teaches her a lesson in pleasure and punishment.

Rick is awakened by an explosion next door. Worried about his neighbour Jessica, he goes to check on her. In doing so, Rick discovers that Jessica has summoned the succubus Caesetia to their world. Now Rick has to deal with the evil that she is, what she wants, and how much that is going to change his and Jessica’s lives.

The work is told from the main character, Rick’s, perceptions and at times that tends towards a bit of a ‘sex-focused male’ aspect of his personality. Now a good part of this is what Caesetia’s powers do to him, but there’s more to Rick than that, but not really seen. As the story unfolds and the results of what happens with Caesetia become more clear, that past dims a bit. The same can be said about Jessica, except she’s mainly unconscious through the entire work, having made a mistake in her summoning and Caesetia taking advantage of that. That said about two of the characters, the third, Caesetia, who is the succubus of the series, is both interesting and disappointing.

Caesetia is, in many ways, a stereotypically evil succubus with really only one thing on her mind, and it isn’t sex, it’s escaping from Rick when he binds her to him. That’s a shame because there’s every hint that she has more to her than being stereotypical. There’s very little to her backstory, there’s not a lot of focus on her personality, other than her particular view of sex, what she wants, and how she sees the other two characters. There’s some mind control being used by her that’s quite good and results in one hot piece of erotica and one, sadly, over the top scene that almost made me give up on the work.

While the story is written well, and there is a lot of story to be told, the thing of it is that Caesetia herself gets stuck in a bit of a rut very quickly. While I understand the need to show she’s evil, that she wants to get rid of Rick and escape, that happens over and over again. Caesetia has a lot of promise as a succubus, she has all of the seductiveness, the sexuality, the means to twist perception and reality and that all turns into some very hot erotica. Where the story falls short is that in almost every moment she is with Rick, she is lying to him, trying to trick him, changes her story and so on.

This gets old very fast and I didn’t like that part of the work. I understand it, that is her personality, but honestly if every conversation between the two of them is going to be an argument back and forth which ends with Rick commanding her not to do one certain thing again, and again, and again… that’s going to take a lot of the flow and story down with it and it need not be that way. She is evil, that’s understood in this work, very clearly so, but hammering away at this plot point just didn’t make a lot of sense to me.

There’s so much else going on which should be focused on, and it isn’t I think. There’s a transformation, some revelations about Jessica, the backstory about how things came to where they were, even that artifact that keeps being mentioned over and over again. All of this should come to the fore over Caesetia just being a liar and then having sex with Rick.

There needs to be more focus on telling the story and a little less on one single personality quirk that just isn’t as interesting as the rest of the story. As well, the erotica goes a bit over the top towards the latter part of the work and that, while making sense, didn’t work as well as the first erotic sequence that Rick goes through. There is some reality shifting in all of this, but there’s also some subtle mind control that I liked very much. Perhaps more focus on that part of the story over some wild out-of-control erotica would have been better.

The characters are good, a little stereotypical however here and there. The writing is reasonably good, though the dialog could have been tighter at times, or at least, if nothing else, more focused. More focus on story in the latter half of the work would have been nice, but that doesn’t hurt things too much.

Really a good beginning to the series and I look forwards to see where things go from here. I’d like a little less stereotyping of Caesetia, if for no other reason than she has to be more of a character than simply a lair that is good at having sex.

We’ll see what the next works bring with them, supposedly an Angel and a Witch, whenever they may appear…