A Review of The Succubus Next Door by Remo Santomauro

A Review of Synthie Recalibrated by Alina X 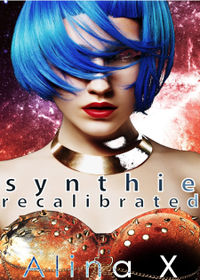 A review today on the Tale of an anthology work that contains three stories that revolve around a similar theme but approach it in different ways.

There are many truths in the universe and many universes within those truths. Some worlds are in the future where the impossible can be made real. Some are in the past where battles are fought both within and without. But in all of the moments, good and bad, difficult and challenging, there is one single truth that comes from all.

You can be true to yourself, but first you have to find what that truth is and accept it…

synthie recalibrated: Sequel to synthie. Down on the planet below Station 6 is something that doesn’t want to be found.

Agamemnon is a heavy gravity planet with faint traces of an ancient alien civilisation, and a core mine that is the source of Station 6’s wealth. After a mysterious zone is discovered that probes are unable to penetrate, Mike Alson’s experience as a space pilot and his biosynthetic body make him the ideal person to investigate.

When Mike tries to enter the zone, his own synthetic systems are not invulnerable to attack, but he is determined to get to the heart of the zone and find the alien technology that is hiding there.

Last Summer: A museum archivist discovers an ancient phallus and takes it home to play with. But the phallus transforms her, becoming a part of her.

Even as she struggles to come to terms with her new nature, she meets a girl on the bus and decides to take a chance…

The Princess and the Succubus: Arianthe, the king’s new bride, is a sorceress determined to end is His thousand-year-long reign, but He isn’t the demon she thought He was, and she lacks the strength to resist His power.

Fellow prisoner Barb, a succubus, forms an alliance with Arianthe, and together they make a desperate attempt to take away the king’s power.

As always with anthologies, I will review the Succubus story first and review it before turning to the collection as a whole and giving a review for the work in its entirety.

Arianthe is a sorceress who finds herself at the mercy of a cruel king that has his way with her and then intends to kill her. Imprisoned, she is approached by a Succubus named Barb who ask for her help to be free and in return Barb offers Arianthe a means for seeking her revenge… and something more… if she can overcome the power of the king and her own fears.

Of the three works in this collection, by far I felt the most strongly towards this, the last work in the collection. Arianthe is an amazingly complex character and while her past is a bit murky, there’s something about her that was captivating, strong, and powerful. As the story unfolds and the internal struggle she faces is revealed, the hold that the king has by means that Barb is aware of and explains to Arianthe, the strife of that struggle, the need to try and push through and do what she must for both her sake and Barb’s is gripping.

Barb is an amazing Succubus character. It is very clear that she is a Succubus, but she is also not a stereotypical one and in this story that is really an important thing. She’s strong in her own way, she has a need to be free and when she encounters Arianthe, Barb desires her freedom, is willing to do much to have that, but there is something more. As that simmers in the background of the story it allows for some interesting turns of character in Barb and with that comes a story about Barb herself, what she sees in Arianthe and what she is willing to do.

There is really very little erotica in this story and really there need not be because it is the characters themselves, their struggle with the events around them and what that leads to that is so much more than what a simple erotica story would be. The story makes a good deal of sense, there is not the feeling of things happening “just because” but rather each event, each action, each moment means something and all leads to the climax of the work which turned into something more than I expected and made this work grander as a result.

The postscript of the story also touched back on things that happened in the story, and it answered two important questions as well. But it also ended the story on a point where I did, so very much, want to see the “what happens next” part of the story. I think that needs to be told fully because there are many questions about Barb and Arianthe that didn’t come to a conclusion and I really would like to know the answers. Strong characters, a world that has a lot of promise to it, and by the end of the story you really want to see more. This would be an amazing novel and I’d love to see that appear sometime.

For the collection as a whole, I found that the other two works are more erotica than story for the most part which worked well I thought. The first, in a science fiction universe, was rich with characters and the world they live in. I did not read the origin story of Mike and how he came to be in the situation he finds himself in, but there is just enough background told that I felt I understood what was going on and the story took me from there. It is a really well told science fiction mystery/erotic tale and I liked the work very much for all that was told in the story. This work also ends on a pause and there seems to be more to be told in this universe and that will be interesting to see.

The other story is a mix of magic and reality, but also there is an undercurrent of love and understanding that takes this from base erotica towards something more. It’s a story about trust and finding that one person that’s willing to take a chance on you no matter what. And if there happens to be a miracle involved, that just makes the story more heartwarming and enjoyable.

I’ll give the collection four out of five pitchforks as well.

Three well told, strongly written, and interesting stories that touched on quite a number of themes, ideas, and moments that I enjoyed. Perhaps the erotica wasn’t quite as good as the stories themselves, but really it is the stories told that makes this work worth reading.