Succubi Image of the Week 398

A Review of Claimed by the Demoness by Kelly Freer

A Review of First Time with the Incubus by Savannah Harlow 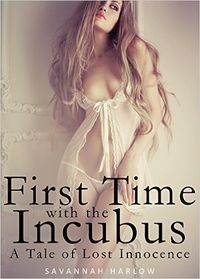 First Time with the Incubus by Savannah Harlow

A short time ago I reviewed a work on the Tale called Taken by the Incubus and His Tentacles by June Harper, the work originally released in August 2014. Last month, the same story, save that the editing is better, reappeared under another author’s name. For the sake of completeness, what follows is the review I gave the previous work, with some minor changes.

But the rating remains the same.

There needs to be a point to a story. More than a wave of a hand, an expression of mystery and nothing more. It is also wise to have more of an ending than the work coming to a screeching halt right after the erotica comes to a close.

When sexy, innocent Ava receives a gift from a mysterious stranger, she doesn’t know that it houses the spirit of an incubus who feeds on the virginities of sexy women! When the incubus escapes, he takes Ava in the night.

Ava travels to New York to her dream job for the summer, along the way meeting an old woman who gives her a necklace. Ava breaks it and then something odd begins to happen.

As a whole the summary suggests that the oddities, the incubus, is central to the story and that much of the work focuses on that. But that isn’t true in this case. There is substantially more time spent on Ava’s travel, finding her apartment, meeting her boss, and they spending time together than with the incubus of the title of the book. In truth it isn’t even clear if he is an incubus, there really aren’t any clear signs that he is, and as such that is a bit disappointing. His name is never revealed either for that matter.

There really isn’t all that much in the way of erotica in this work, really there is one short scene the didn’t do anything for me at all. It had some incubus-like qualities, but overall what happens just didn’t have much heat in it. The scene plays out in the last five or so pages of the work and at the very end it simply comes to an abrupt stop, the incubus vanishes and the story comes to a close.

As a whole the work would make for a good opening chapter, or really the basis of three chapters, of a longer work, but in this case, how the story plays out just seemed to be a series of loosely connected scenes that eventually ended with a very short hot flash piece. The thing is that the buildup to the incubus appearing really set the stage for a story, one that has two characters with their own quirks and they are described really well. But going from “ordinary” to “something weird is going on” happens so abruptly that it feels out of place with the rest of the work.

I think that drawing out things, playing on the sense of something being off, eventually leading towards the incubus appearing after Ava had been teased or dreamed of things would have been more interesting and the final encounter would have worked better. As it is, the incubus just isn’t interesting enough when compared to Ava and the other main character, or really any of the minor ones.

All kinds of story being told, and really if it was the beginning of a novel it would hook you into the story well. But in this case, it takes up the vast majority of the story really leaving only a very short passage for the erotica that is quick, blunt, and really didn’t have all that much heat in it.