A Review of First Time with the Incubus by Savannah Harlow

A Review of Claimed by the Demoness by Kelly Freer 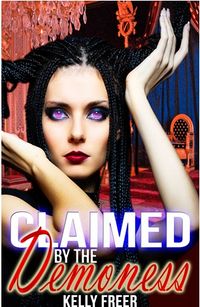 Claimed by the Demoness by Kelly Freer

There needs to be, at least for me, something in a story that isn’t quite expected or assumed. The further away the story is from what I think to be stereotypical, the more it tends to draw me into the story and enjoy it for what the story tells. A work cannot stand on its erotica alone, nor can it try to use a slipshod idea as the core of the work. That just does nothing for me.

That is where the story really begins…

As the first freshmen to play in the University football team, and the most sought after quarterback of the division, Lee depicts the American jock ideal. Every female on campus wants him.

But Lee has a secret: he’s still a virgin. An encounter with a hyper-aggressive delta-delta-delta girl at the football team’s party causes Lee to run away from his abnormally strong lust. Eager and conflicted, he arrives at Hellspot to make the devil’s pledge: his very own succubus to drain him of all his fantasy and urges. But there’s a catch. Lee will forever be bound to the succubus’ lusty ways. Will Lee get out the hellspot and save himself from eternal lust? Or will the all-star quarterback be claimed by the commanding power of the demoness succubus?

Lee’s life is both truth and lie. In truth he appears to be what he seems to be, but within the lie of his own reality is hidden. A moment, a mistake, and he then finds himself in a position where his soul is at risk of being claimed by a Succubus forever. And that fate is one that tempts greatly.

The work is very involved and detailed in that Lee, who he is, how he reacts, the one he calls a friend, are very real and they aren’t cardboard stereotypical cutouts of “jocks” in that there is something more about them both. Listening to Lee’s thoughts in the story puts him into a different light and when things go off the rails as the story progresses, the emotional attachment is quite strong.

The Succubus in this story is never named, which is was a little disappointing. She has a human form and a demon one, which I didn’t really care for, but it was meant as a contrast so that worked well. But the way what she is comes out in the story is a bit heavy handed and I think it could have been a lot more subtle than it was. The moments of erotica with the Succubus are very much a Domme controlling in nature and some of that was very hot and well done. But there were other moments that, while seeming to make sense, felt wrong.

The erotica in the story waxes and wanes with the majority of that being in the moments between Lee and the Succubus. There is a good deal of Succubus mind control in those moments which works well as a whole. The scenes are a bit more violent than I personally like and I think there should have been more seduction in what happened rather than the direct demand of submission that the Succubus demanded of Lee.

Setting that aside, the setting up of Lee being in the presence of the Succubus was also a bit odd, a bit forced as well. The encounter between Lee and the manager of the hotel he finds himself in was odd and felt wrong from the beginning. It didn’t make a lot of sense how that played out and with that the need to “push” Lee through that part of the story and into his “doom” seemed to override the storytelling in order to get to the erotica.

After the climax of the work, when the aftermath comes, it leads to a point which, quite obviously, seems to point at there being another part to this story, an ongoing struggle between Lee, the Succubus, and what she has claimed. That is, again, somewhat forced but that is necessary as the work comes to a rapid close and there didn’t seem to be time allowed for that to develop further along as I think it should have. Perhaps it will sometime.

There are a few scattered spelling and word errors, but nothing too overwhelming or that interrupted the story to the point where it was distracting. As a whole it is a story of entrapment of the unwary and what sacrifices are made in the name of another. That part of this story needs to be told more than it is.

As the opening to a longer series, this really would work well. There is a lot of plot, character development and more. While so much of the story is taken with setting up Lee and telling about his life, that does offer a doorway into a larger universe of storytelling that I hope the author might explore more fully over time. Giving purpose to a character is a good thing, what isn’t so much is when the story comes to a close after that purpose is revealed and the story ends.

It is the rest of the story that matter as well and needs to be told.