A Review of Warrior Demoness by Fran Heckrotte

A Review of B’Les and the Immortal by David Hamman 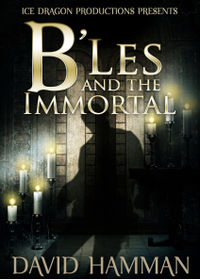 B’Les and the Immortal by David Hamman

Honour. Trust. Belief. Three things that are, at least to me, important to see in a Succubus, whomever, whenever, or whatever she is. More so if she is the Mistress of others or in any way, shape, or form, having a place of power or responsibility. The one thing that is telling most of all is, however, when one they care for is no more, how do they respond? Are they simply evil or are they something more than that?

What if the question becomes less about what happened and why it happened than, in fact, who was involved in it?

It’s an important thought if you think about it. More so if you are the one that must decide what is right or wrong and why, in the end, it matters to you.

B’Les, the master thief of the Milesport, set out to prove his skill. Only the finest of jewels will satisfy his need to accomplish the perfect heist and reinforce his status in the guild. To that end, he’s set to rob a local merchant of his most prized possession… A pair of flawless diamonds. Every prize has its price and B’Les is about to find out the cost of stealing perfection.

This work is half heist adventure and half a scene of seduction with a twist within it. There is quite a lot of world building that I enjoyed, especially the history of B’Les which I thought was well considered and spoken of. The adventure itself, the moments leading towards the heist and the moments after are full of description and paint the moment well in the imagination.

Upon succeeding, B’Les finds that the stones contain what might be described as a Succubus named Meredith. It’s not clear if she is a Succubus or not, but her actions, appearance and personality seem to say that she is. Certainly what she does at one point does make it clear that Meredith has some of the stereotypical aspects of a Succubus, but she isn’t stereotypical. How she appears, the method therein, and what her form appears to be is not at all like what one would expect a Succubus to appear.

She is seductive, enthralling, and in her own way a rather unique being. There isn’t really all that much erotica in the work, though there is some teasingly seductive moments that I enjoyed. That is passed over for the adventure to continue, B’Les acts as he must and then the story comes to a close… far too soon really.

It does make for what would be good opening chapter to a long work and I do think that the author should continue the story of B’Les, with or without Meredith. I would, of course, like to see more of her, her story and so on as that isn’t explored with the same depth that the story of B’Les is.

Good writing, no errors in spelling or grammar as well. It is an adventure story with a little bit of titillation which as a whole works well to tell the story… It just really needs to be longer honestly.

Quite a good start, the heist scenes were very interesting and the story of B’Les was well done. Meredith might or might not be a Succubus, though the clues are there and I would be interested to see where this story goes to from here. Perhaps it will sometime…