A Review of Rune by Cera Bryn

A Review of Passing the Exam by Viktor von Priapis 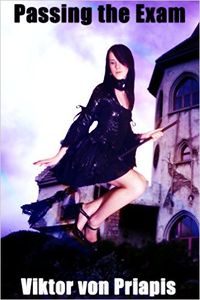 A little while ago on the Tale I reviewed the first work in the Summoning the Succubus series by Viktor von Priapis. You can find that review here on the Tale if you’d care to see it. At the time I was wondering where the series would go next, what Cassandra’s choice would mean and how complicated her, and the story around Apiana, the succubus of the series, might be.

There seemed to be a story, amongst all of the hot flash, and it was one I wanted to see unfold further. In the second work in the series, there’s some hints of story, but the hot flash takes over once more…

In order to pass her classes at Mistress Lilim’s Academy of Necromantic Arts and Arcane Studies, Cassandra Crosswell must summon and bind a demon familiar. The demon she manages to bind? The futa succubus Apiana. Now, she must demonstrate her power in front of the headmistress of the academy herself if she has any hope of passing her classes. But the Mistress Lilim is not quite as she seems…

Cassandra’s more feared moment has arrived, her exam. After being told she must summon her demon to pass, and revealing Apiana’s name, she finds herself being tested not by a teacher, but the headmistress. And that testing will be so very thorough.

The work follows on almost immediately from the previous one, and there’s a good bit of continuity between that two works that I liked because Cassandra’s past actions have consequence in this work. There’s a little more world building, some more characters appear, and there is the hint of a larger story starting to appear.

When Mistress Lilim appears, there are a lot of questions that come with her, not the least of which is exactly who she is, if she is whom she appears to be, and most of all, the interesting question of her past and that of Apiana. There’s a lot of hints about that, but really there isn’t much in the way of telling that story.

What follows, through much of the core of the story, is a reasonably hot piece of futa erotica mixed with a little mention that Apiana is a succubus and in its own way, the events make sense, tell something about Lilim, if only a little so, and as well something about what Apiana desires as well. There’s a smattering of plot within this part of the work which teases there is more happening, more to be told, but as that isn’t the focus of the work, the erotica is, that isn’t played out fully.

After the climax, and the aftermath comes, there is a clear hint as to where Cassandra’s life is going and what her future seems to be. But that was really telegraphed for some time in the story and wasn’t all that surprising when it appeared. The story once more focused on the sex scenes to the loss of some plot, character development and story, but it wasn’t completely lost having some of that to be seen.

The work has a few minor word and grammar errors, but nothing terrible or which might take the reader out of the story. The main thing is that the story, the characters, tend to be pushed aside for the sake of getting to the erotica and I really would like to see a bit more story and character development happening. There is some, and in being so the work is slightly better than the first in the series. It would be nice to know more about Apiana, about Mistress Lilim and Cassandra herself than just finding them all in a magically created futa threesome.

I hope to know more about Apiana, she’s still a mystery. More so about Mistress Lilim as she is quite interesting in her own right. Where the story goes from here, if it does, I will be looking forwards to.