Succubi Image of the Week 397

A Review of In Her Dreams by J.E. Keep and M. Keep

A Review of Seducing the Succubus by Felicity Silver 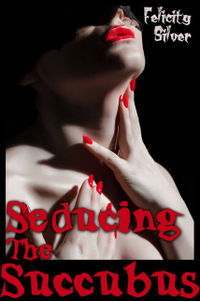 Seducing the Succubus by Felicity Silver

Occasionally I come across a story which has as a character a Succubus that I find very interesting. They have personality, drive, but most of all, there is something about them that catches my attention and holds me to the story to see where it takes them.

I want to know more about them, their past, how they see themselves and others. If they have more than just the stereotypical view of the universe, or if, as a chance, the universe has something to teach them. But then the question is if anything really changes when that comes or they do…

The art of seducing is the Succubus’ job. This Succubus is about to get a surprise when she becomes the seduced.

Halloween approaches, and the Succubus Cassandra is forced to work instead of play with her Master. She reluctantly finds herself among sweaty, awkwardly moving humans. She must find a human to suck the libido from so she can resume her night of fun with Master. Years of practice enable this self assured Succubus to complete this task in mere moments. Until Markos.

Cassandra is a Succubus, one of, if not the best. On Halloween, when she expects something special, she is sent to Earth to claim a soul, just one. She finds one, but then discovers that not all those she seduces are seduced. Some are adept in seducing her as well.

This work is a bit more than a hot flash in that while a good part of the story revolves around Cassandra’s seduction and she facing her own seduction in return, there is a lot more than that told. While there isn’t much said about who she was before she became a Succubus, her life as one is told in quite a lot of interesting detail that I enjoyed. She doesn’t have hooves, thankfully, and her appearance is seductive beauty rather than something more evil in nature. But she is, just slightly, stereotypical in her need to take souls, to be evil, and some of her attitude is a bit callous at times.

Much of the story is told from her perspective and that gives quite a different expectation as the story moves from arrival to encounter, entrapment, and, finally, seduction. Cassandra is very seductive as a Succubus, being that it is Halloween, it’s amusing to hear her thoughts about this time of the year, how she feels about it, and more what it is like for her not to have to hide herself away from those around her.

When the work turns toward erotica, there isn’t any urgency to tell that part of the story. The tapestry of seduction is woven around both Cassandra and Markos in a way that works really well. Cassandra tipping over the edge into submitting to Markos is very hot and her thoughts as they play games with each other I did enjoy very much. Eventually the climax comes, both for them and for the story, and it felt a bit rushed at the end. I think there should have been more of the “afterwards” told when they had their moment than there is.

Which then brings me to the close of the story. Who Markos is, the twist in the story, is very well done and I though it was hidden very well to the end of the work. But with that reveal comes a series of questions, none of which are really answered, which is a shame.

While the work tells a full story, I do feel like there is quite a lot that isn’t told, left open, and in that I felt somewhat disappointed. I like story with my erotica and this work had a lot of story to tell and much of that was told… I just feel like there is something missing… It could well be that there is a part two to come, which would make some sense… We’ll see.

While the story was unique, Cassandra I found to be one of the more interesting Succubi I have read, and the erotica was very hot and passionate… it is much too short for all of the promise that the story began with. The work plays with some ideas and concepts that I would have liked to see expanded on, stories told, and more. But it wasn’t and that’s the bigger shame.