A Review of Redneck Succubus: Queen of the Trailer Park by Beatrice Evenmorne 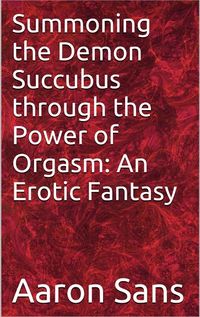 Some short stories bother me more than others do. What I mean by that is a story begins, the characters are drawn together, and the story becomes very interesting. But then, quite suddenly, everything climaxes, in more ways than one and the story ends far too soon.

It’s more bothersome when the hint, and a bare one at that, of who the Succubus on the story could be is limited very much to a few lines… and when she is one that I like, even with hooves? That is very frustrating to me…

Johan and Alexa are put into a dangerous position where Johan must go on a quest to seek help for his tribe. Alexa volunteers to be an avatar for the summoning of a demon protector, which requires the use of sex and orgasms to fully awake the beast and bend the demon’s will to his. This might be a fun journey after all.

The summary here is a little bit off. Johan is a warrior of the North and he must leave on a quest to find help for his people from an invading army. In order to do so, his wife Tarja agrees that she will become the vessel for a demoness to inhabit. The die is cast, the summoning made and Tarja is possessed by Alexa, who Johan must tame.

There is much to like in this short work… Johan and Tarja’s relationship and goals for what they are going to do are made clear, the shaman who helps them pushes the story along, and very shortly we see Tarja possessed and transformed into…. Alexa.

Alexa is, quite simply, a Succubus as far as I am concerned, though there is a second one mentioned for an instant before the transformation occurs in the story. She appears with black wings, horns, and chalk white skin… and hooves. Save for the hooves I rather liked the description of her and it was interesting to see her personality as compared with what Tarja’s was previously.

What follows is Johan’s domination of Alexa, physically and sexually, and at the point where that story ends… so does this work. That is a shame really because it is a very good opening to a longer story… but it isn’t there to be seen. I would have liked to know more about the whys and hows of the story, how things link together and so forth. But instead all that does not come, though both Alexa and Johan do.

Besides the shortness of this work, the one other problem is a need for editing, there are several word mistakes made: lead for led for one. There is also an odd disconnect between Tarya being in the ceremony and Alexa in the other world being summoned that was confusing and unclear. It tripped me up and took me out of the story as I tried to understand just what was happening.

In spite of the shortness and the few writing stumbles, it really would be a solid beginning to a much longer work. One that I at least would like to see sometime…

It is really an interesting beginning to what might be an even better story. The characters are there, the quest is clear, and the costs are as well. It is a shame that the author didn’t continue the story from where they ended it. Still, should another work appear in this universe I will be looking for it….