A Review of Sandwiched by Succubi by M.E. Hydra 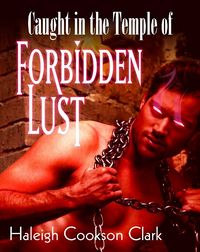 Caught in the Temple of Forbidden Lust by Haleigh Cookson Clark

The second review today of a pair of works by the same author on the Tale. I reviewed the other work Never Summon a Succubus here on the Tale last Friday. I am reviewing them in reverse order of publication as the last work released is billed as the prequel to the first one. Both have some rather interesting characters and events in them and I do think the author tells quite the story. Today’s review is of the first work in the series that was released called Caught in the Temple of Forbidden Lust.

When you make a deal one does need to make sure that all of the I’s are dotted and the T’s are crossed otherwise you might find yourself in a situation you might not have expected. This is true for sorceresses as it is for Incubi as well…

Braena Wyvernwood, skilled sorceress and treasure-hunter extraordinaire is as cocky as she is beautiful. One evening while attempting to “liberate” the wealth of a temple dedicated to a dark cult of deviant pleasures, the arrogant girl stumbles upon something she hadn’t counted on – the agonizingly beautiful demon guarding the temple! The excited adventuress attempts to magically compel the demon into leading her to the cult’s treasure trove, but she soon finds out that the demon is only too happy to teach her a lesson in humility she’ll never forget.

Braena is in search of a treasure and in doing so finds an Incubus. She binds him to her, but she forgets something important in the binding which finds Braena in a position where the Incubus takes every advantage of her. Braena has him exactly where she wants him now… or is it that the Incubus has her where he wants Braena to be?

Braena isn’t quite the innocent she was in the other work in this series in that she’s more focused, older, and as a whole, a lot more experienced in the ways of the world. With that comes a certain attitude that felt slightly wrong at the beginning of the story. However, when she encounters the Incubus, then her real personality comes out and much of what I liked about her in the other work came back again. It’s that cute, slightly submissive attitude in the midst of having her sexual desires met that I find wonderful and as that happens, the reason why I liked Braena came back to me. She’s quite happy to give into her sexuality, but for the right person in the right way.

Kas, the incubus of the work, begins out to be somewhat stereotypical in nature, leaning towards a lot of threats and bluster, but when Braena gains the upper hand, he has to change his approach and it is when he turns towards seducing, with a bit of mind control. Braena, that the story becomes very hot and I liked Kas much more. He is a bit devious in his actions and desires, but as the story unfolds he gets caught up in Braena’s own desires and things are very hot and deliciously so.

There is a really neat twist in the tail of this story, which I shan’t reveal, but really it made me smile and did speak to Braena’s own sense of what is important to her. If this was actually the second work written I can see how her encounter with a particular Succubus might be the beginning of this. It’s an interesting thought.

The thing is that Braena herself in this work is quite a bit different from what she is in the other story. It isn’t so much what she does with Kas or even the path that take her to him. It’s more of a question of her going from wanting to be submissive in the other work to becoming more dominant in this one. It isn’t explained what happened between the two stories to make this change in her and it’s a question that bothered me throughout this work.

When the story turns towards erotica, it is every bit as hot as the other work in a lot of ways, though I have to admit that Kas is a bit more forceful and dominant over Braena. That does work and it sets up something later in the story that I couldn’t help but laugh over when it happened.

A neatly told adventure story with a well told hot flash that brings things together really well. The personalities of Braena and Kas come out well in the story and both of them I really like a lot. The story ends on an interesting note and I think there really should be another work in the series that ties things together in a way that makes everything fit together.

I think that Braena isn’t quite the same character she was in the other work in this series and that bothered me a bit. The erotica is very hot, the writing is excellent, and considering that this work was written before the other is does well reflect on this author’s writing and what came next. But reading the works in the order it is suggested tends to make the latter work better than this one did for me at least.

I would like to see a third work in the series with Kas, Misstiand’ara and Braena together… I think that would be something quite hot and heated for the three of them by far…