A Review of Possessed by a Demon: Book 1: Awakening by Kat Firestone 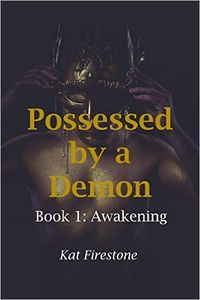 Possessed by a Demon: Book 1: Awakening by Kat Firestone

A review of a recently began series in which an Incubus appears to make a college students life more interesting than she expected it would be. There is that moment for some where they turn from what they appeared to be and become who they actually are. The question that comes along with that decision is whether they understand who they are, or if they only think they are.

There are some stories which have a theme of possession in them that never quite manage to get to the actual story. They tend to hover around the erotica, try to tease the story out of some passion. But there is story in the characters themselves if one only listens to them. No matter how we might not want to know…

Eighteen-year-old Silver Bellingham has escaped her small hometown and arrived at college intent on exploring her repressed and raging lust. But on her first night away from home, her virginity and lust awakens an ancient incubus hell-bent on opening a portal from his world into hers. Now Silver must learn to live in the shadow of Hell, and navigate an unknown reality that will either drive her to the heights of ecstasy or her utter destruction.

Silver leaves home, and the false front she has been putting up for years in order to be what she feels is her true self at college. A wrong room picked, a spirit awakens, and she finds herself being haunted in more than one way.

The work is told from Silver’s perspective and, as a whole, she’s rather unlikable for much of the work. She is very much the wild child away from home and as she goes on in the story, it becomes clear there isn’t much of a filter between her mind and what she says out loud. Along with that, her decision to run away from all she was and become what her fantasies pull at her makes for moments in which there not much left save her need for sex and nothing more.

That means her thoughts revolve around sex, aren’t filtered, and when she is confronted with something that she doesn’t like, there’s no holding back for her. She seems to lose control and in doing so that makes her a little less of an interesting character for me. That said, the story itself focuses, in this the opening work, in setting up Silver’s past, her reasons for what she is doing, and her first moments in her life at college. There are some amusing moments, but as well there are some dry passages that are a lot of reflecting upon her plans done and her plans to be.

Silver encounters what seems to be an incubus, or at least that is what Silver believes it to be. Who, and how, that comes to pass seems to be an interesting story and that I expect will lead towards some points in the series going forwards where the incubus possesses others or something similar. It is also entirely possible that Silver herself might become a succubus, considering her past and goals that she has clearly stated in the work.

There is one bit of erotica, really a hot flash, in which Silver and the incubus have their moment together. There is an aftermath, which is something not seen in a lot of works, that I thought was quite different and interesting as well. The heat is luke-warm at best, as it feels rushed in order to get to the next part of the story and begin setting up the series going forwards.

There are a lot of hints about where the story might go, and I think that will be interesting to see. There are, however, a lot of unlikable characters in the work, mainly male, but Silver herself has her own level of dislike. That is a bit of a problem as, if she is the heroine of the work, she needs to have something likeable. Considering her attitude and her goals, I’m not sure about that.

The writing is quite good in expressing Silver’s thoughts and what happens around her. The work sets up the series well, tells just enough about Silver to explain about her, puts in the incubus in the quickest way possible, and then the story travels onwards to the ending.

The ending is quite open, leading into the next book in the series without a doubt. I do hope the characters becomes less self-absorbed and in being so the story becomes more as well.

The next work in the series is titled Incarnation, having some obvious connotations in that. Hopefully that work will balance out the erotica and the story itself as much as can be…