Succubi Image of the Week 396

A Review of Possessed by a Demon: Book 1: Awakening by Kat Firestone 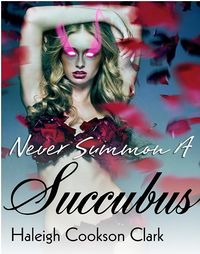 A pair of works by the same author this time and this coming Sunday on the Tale. I am actually reviewing them in reverse order of publication as the last work released is billed as the prequel to the first one. Both have some rather interesting characters and events in them and I do think the author tells quite the story.

If you are going to look in places where you aren’t supposed to, you shouldn’t be surprised when you meet something that you didn’t expect to. Sometimes that’s a bad thing… and sometimes it opens your eyes to things you never thought of before…

In this prequel to Caught in the Temple of Forbidden Lust we follow the life of the beautiful sorceress Braena Wyvernwood back when she was still just a lowly apprentice. Late one evening she makes good use of her powerful mentor’s departure and decides to better explore his keep, eventually stumbling across a seemingly ordinary room. However, little does the curious girl realize that the room hides a seductively sinful secret! Will she be able to undo the powerful magics that accidentally released a sexy new playmate before her master gets back? More importantly, considering what a rare opportunity this presents for the frustrated young sorceress will she even want to?

Braena is an elf who is studying to be a sorceress, but as her teacher is away, then she, of course, has to play and discover all of the things that she hasn’t seen so far. She finds a hidden room and accidentally summons a Succubus. And then the play time really begins and Braena discovers that submitting to the wiles of a Succubus is very pleasurable.

I really enjoyed this work as a whole in that there is a lot of story being told before any of the erotica comes into play. Quite a lot is told about Braena’s past, what she is doing at the moment, and what she thinks about her teacher. It’s also interesting to hear her thoughts about everything that she sees and how that changes her opinion of her teacher as well. When she discovers the hidden room, and makes what is honestly a silly mistake, then the Succubus of the work appears and her name is Misstiand’ara.

Misstiand’ara is not quite the stereotypical succubus and it isn’t exactly clear if that is because of what her situation is or if how she acts is really how she is. Nonetheless, Misstiand’ara is seductive, quite dominant, and how she wraps Braena around her little finger is very hot and wonderfully told. Misstiand’ara has an appearance that is just slightly evil, but really it’s more towards her sexuality being very powerful and how she uses her powers to draw Braena to her, and then make her submit, is nicely hot.

There are some aspects of Succubus mind control in the work that really aren’t mentioned very often, such as in her scent among other things. But what really sets her apart is the nature of her control that Braena cannot resist and falls to completely. The mention that Misstiand’ara makes of Braena falling to her own “dark desires” is very apt and when the story turns towards being a hot flash, that’s when the story really shines.

A wonderfully told sapphic hot flash in which both Misstiand’ara and Braena fall to their own desires and needs. There is a turning point for Braena when she calls Misstiand’ara her Mistress and when that comes, and they both do, the story isn’t simply a moment of sex and nothing more. There’s more to the story, something changes in Braena, and that really interests me as much as Misstiand’ara herself does.

The work ends on a lovely close, one that just felt right after all else that happened, but it left me wanting somewhat. While I am reviewing the second work in this series first, knowing what happens in the first work, which chronologically is the second in the series, is a bit of a problem. As much as this work is wonderful, it doesn’t really connect with what happens in the second and as such there is a lot in that story that doesn’t quite connect with this one.

Well written, steamingly hot, really enjoyed the work very much. Just really would have liked to see more of Misstiand’ara, who she is, how she came to be where she is, and, perhaps, an answer to the question of what comes next… and who does.

I like Misstiand’ara very much, she’s very much the image of a seductive powerful succubus that I so very much enjoy reading about. The erotica is very hot and deliciously so with just a hint of mind control in it that I so do enjoy reading.

Next time, the second work, actually the first, Temple of Forbidden Lust, in which Braena encounters an Incubus and makes a deal… or two… but as for Misstiand’ara… She’s never seen.