A Review of the Incubus series by Abigail Fox

A Review of The Ghost and Devlin Muir by S. K. McClafferty 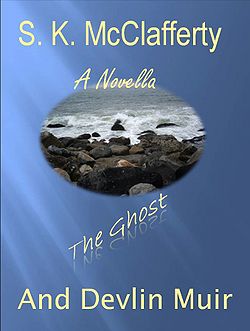 The Ghost and Devlin Muir by S. K. McClafferty

Sometimes a Succubus isn’t a Succubus…  Or perhaps more accurately, sometimes a Succubus is a ghost with one hell of a sex drive. Now there are some stories that I have read where all the story wants to focus on is the sex and nothing more. I found a work that is hot at the right moments, but also tells a deeply involved story at the same time.

In doing so, something interesting happens… It makes you think and wonder about how the pieces of the story connect together. Any good book, mystery or not, needs to make you wonder about things… It’s nice to find that kind of work. Even if the Succubus isn’t quite a Succubus really…

Devlin Muir is having the worst day of his life, until something happens that turns his world upside down. In the midst of devastating chaos, he discovers that he’s the long lost heir to the Foxley fortune: a sprawling estate near Bar Harbor with a breathtaking view of the ocean. It certainly seems like the perfect place for an artist to hang out to lick his wounds and create, and since there’s nothing left for Devlin in Boston, he decides to relocate, and he heads for the quaint seaside village of Jenna’s Cove.

But his new situation holds more than one surprise, and Devlin very soon finds himself caught between a budding romance with Jilly, the caretaker’s lovely Wiccan granddaughter, and Serena, the ghost of his great-great grandfather’s mistress, a lonely succubus.

Devlin, a lifelong skeptic, is torn between the woman he wants, and the one who won’t leave him alone. Serena doesn’t just use men, sexually. She uses them up, and Devlin is desperate for a solution. But can thirteen modern day witches and a spell to reunite Serena with Captain Jacob Foxley really bring Devlin the happiness he’s seeking with Jilly?

The summary of this work is really very good and gets to the core of the story very well. In fact it is one of the better summations that I have seen is a long time. That said, there is quite a lot more in this work that isn’t told in the summary and while some hints are given it really doesn’t quite do justice to the work fully.

This work has life in it. By that I mean the characters are not cardboard, scenes are not there for the sake of them being so. There is purpose in the characters, their lives are entwined and as events unfold there are moments of joy but also tales of loss, want and need.  The story told is one where two souls find each other and in doing so help other souls to find their way.

Devlin is quite the interesting character for many reasons, but I think the one that is most attractive is that he has something that others don’t. A certain attraction that serves to bring him a Succubus named Serena but more importantly Jilly who is a wonderful mix of sass and charm. In fact all of the characters in the work, but especially Jilly’s family, have really powerful personalities and there is no mistaking them when they appear.

Serena, the Succubus of the work is somewhat different from the usual idea of Succubi and in being so it makes her quite the foil against which Devlin and the others are placed against. The moments when she appears can be anything from a simple tease through seduction, control and beyond. Overall she appears to be a ghost in the shape of a beautiful woman, no horns or tail or anything like that. But as the story unfolds it is clear that while she is a Succubus, she isn’t quite the normal one in her needs and desires. The resolution of this work, the solution was quite nicely set up and presented I thought. More so that the aftermath neatly tied up most of the threads in the work which I appreciated.

I would describe this work as being a mystery with a dash of erotica mixed in. Personally I like those sorts of stories and I enjoyed it… mostly. My one issue with the work was the climax of the story which, for me at least, seemed to be rushed and somehow pat in nature. After all of the lead-up to that point I felt a little let down with that part. But in spite of that one thing, the work is wonderfully written, painting a clear image in your thoughts of each moment as it unfolds…

A fascinating mystery with an involved background, characters and more. Not quite the normal sort of Succubi that I look for, but certainly did make me pause and think. Nicely hot, but not overwhelmingly so and a dash of humour that just was right.