A Review of Just This Once by Sylvia Parker

A Review of Julie’s Ascent by Emily Walker 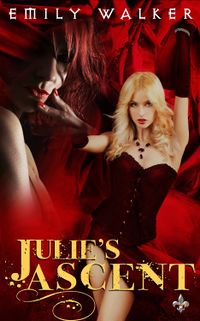 Quite some time ago, I reviewed a work on the Tale in which I thought that the story had some promise, even though it was so very short. I mentioned at the time that the work seemed like the beginning of a longer, more detailed origin story for a series and I wondered if that would ever come to be. If you’d like to read that review, you can find it on the Tale here.

Recently, to my surprise, the work reappeared in a more full and captivating read that I thought was wonderful. There comes a moment when what the truth is does not represent what we believed it to be. Sometimes becoming a succubus isn’t about what you are, but who you are…

When Julie Monroe ends up in Hell, she has no idea why she’s there.

The things does know are: she’s dead, she’s transparent, and she’s been given a second chance.

Given the opportunity to return to Earth as a Succubus, she take the chance to get out of Hell–but she isn’t too keen on sucking souls for the Underworld. To make things even more complicated, she has a huge crush on her mentor, Asa. He’s been in the business of the Succubae for hundreds of years, and Julie can’t help but feel drawn to him.

Convinced she can escape, Julie thinks she can run and hide. But, as she discovers different dimensions of Hell on Earth, she begins to realize that maybe there isn’t a way to escape her fate.

Julie finds herself in Hell, her future to be a succubus, and while that isn’t something she looks forwards to, the more pressing question is what happened to her in the first place. Learning the hows and whys of being a succubus, which are nothing like she expected, she finds that there is more going on than she knows. Questions abound, the answers are few, slim and none, and when she finds out the truth, the questions do not end.

The work spends quite a lot of time in world building, telling of the characters, of Julie herself. There is more depth to this work in explaining Julie’s thoughts, her confusion, her worries, and, in some ways, her desires, than a number of other works of late and that works really well here. At times there is a bit too much “woe is me” in Julie’s thoughts, but she soon gets through that stumbling and moves onwards to try to take control of herself. It is not a simple path, there are many points at which Julie stumbles and needs to be, if not rescued by Asa, then given a talking to.

We really never see Julie’s succubus form, by that I mean horns, tail and so on. In some ways this makes her a better, more complete character in that she still has her humanity in the face of so many others that do not. As well, while there is mention of succubi and incubi killing and taking souls through sex, that isn’t how things work in Julie’s reality. How things work for her is more subtle, but also more dangerous for her and that adds an aspect to things that isn’t seen often. There is a little bit of a mind control aspect here and there in the work, but it is very lightly touched upon and does not get in the way of the overall story.

There are consequences. Some of which are warned of. others that happen. But it is the past that haunts Julie most of all and more over time. Uncovering that past is a constant theme in the work, even through all else that Julie deals with. It is a mystery that isn’t simply explained in a word or two, it literally takes the entire work for all of the pieces to fall into place and when they do, it is really quite surprising.

There are two other characters, one a succubus, one an incubus, which add some twists to the story, but also explain a lot about what happens that I think worked well. Asa, who is the other main character of the work, is written well, is a strong personality, and has a quirky personality that I did enjoy too.

There isn’t really any erotica to speak of, really that’s not the point of the work. It’s the exploration of memory, what happens when it is found, and what that does to you. A solid work, really there are no editing errors that take one out of the story at any point. I wish that some time had been spent in telling more about one particular character, why they did what they did. But then, not all of the answers come at once.

I’ll give this work four and a half of out five pitchforks.

Really everything I could have hoped for from what came before. For that being true, for the author finishing this work, telling the story, making the world be all that it is… That is such a wonderful things.

I hope the author isn’t going to wait three years before releasing the rest of this series, at least it seems like there will be more to come. Julie’s story isn’t over, the questions, though some answered, remain. The promise I had seen before comes through quite well and I look forward to seeing more someday…