Succubi Image of the Week 395

A Review of Succubus by Joyce Melbourne

A Review of Succubus: Succubus by Olga Berg 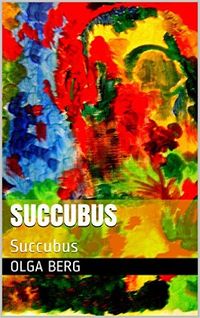 There are few works about Succubi that tell things about them that hold me from the beginning. It especially matters when the Succubus herself might look like the legends, but is not what the legends tell them to be. They can be thankful, caring, offer something to another that changes their lives.

But that is, in many ways, only a small part of whom the Succubus is. Sometimes the horns hide the halo. Sometimes the tail points the way. Sometimes, just sometimes, someone understands all of this and then, something exceptional happens.

We all learn something.

Amadeo encounters a succubus who, he is told, has done evil. After some consideration, he meets with her, frees her, and then in return the succubus frees Amadeo from the past he did not know. His live changes, truths appear, but Amadeo never forgets Alma. Sometimes the truth sets you free, sometimes it just opens the door and you need to step though to find your own truth.

The work focuses upon Amadeo, his life, both past and present, and in doing so there is a mystery that unfolds which is quite telling for all of the characters involved. But none of this would have begun without Alma, the succubus of the work, having been captured, having a talk with Amadeo, and then, over time, revealing to him what his past was.

Alma has the classical appearance of a succubus, hooves, red skin, tail and horns and all, but that is where things change. She is not, at all, what one might expect a succubus to be. That in itself makes for some contemplative moments for Amadeo, but more so, there is a connection, an understanding that comes through their time together that means quite a lot more than seems to be at first. She is there in the beginning, is in his thoughts through discovering the truth, and in the last, she appears to answer a prayer, a telling one, by Amadeo.

I felt that the story gave Alma an angel-like aspect to her, one in which it is clear that her purpose is not to be evil, but rather to open the eyes of others to their fantasies, desires and most of all, the love within themselves. When Amadeo finally learns the most important truth about himself, the one that makes all things possible, that provides a ending to the work that feels right, closes the tale on a point of joy, and, most of all, provides a truth that matters.

This is not a work of erotica, far from it. This work tells a story in which one character makes the journey from being lost, without a past, to having that past known, finding his way, and discovering that, in many ways, two souls, once entwined, are for always.

As much as I loved the story, and how wonderful both Alma and Amadeo are, there are some minor problems as well. The main one being that there is a problem with tenses throughout the work, which some additional editing would have helped with. As well, the text reads a bit oddly in places, seeming slightly confused as to what the author was trying to express. The latter does cause some confusion in trying to understand the text, but considering the spoken dialog, that well could be a reflection upon the characters themselves in a way.

The work ends on a note which offers a satisfying note for the main characters, and at the same time leaves the suggestion that there could be something more at some point. The final truths spoken by Alma turn out to be quite thoughtful, open, and are the truth as she knows it to be. For some characters that is the answer to their prayers, for others it is the shaming of their own faults, fears and flaws.

A story with power, promise, love, devotion. But also with fear, disbelief, self-crimination and need. The telling point is the word of a monk and a succubus and what that means to them both.

I wish the writing had been a little more clear at points, certainly at least one more editing pass to correct the various tense errors as well. This is a wonderful, thoughtful and, for me, compelling story. I hope there is an “after” to be told, but if not, what is here tells something wonderful…